308 rhinos killed in South Africa this year for their horns 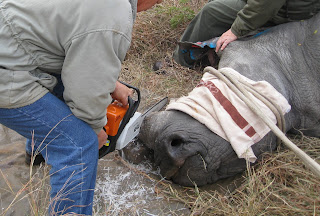 Photo: Sally Kneidel
The website "Bush warriors: stop poaching and bushmeat" reported today that four more rhinos have been killed illegally in the KwaZulu-Natal province of South Africa, the area that includes Kruger National Park. Rhino horns are used for traditional Chinese medicines, despite the fact that rhino horns have been analyzed thoroughly and have no true medicinal properties. Their monetary value is based entirely on Chinese myth and folklore. A single horn is worth tens of thousands of dollars on the black market. Most of the horns poached in South Africa are smuggled into China and Vietnam.

The increase in poaching of rhinos and elephants in South Africa has been linked to a flood of Chinese weapons into the area. According to the Bush warriors website, the South African government has stepped up patrols to apprehend poachers, but the courts are a weak link. Although 147 people were arrested for rhino-related crimes in 2010, the courts repeatedly fail to impose serious penalties as a deterrent, instead granting affordable bail amounts as punishment. 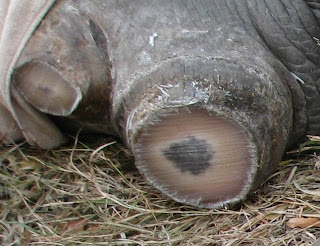 A mother rhino's stumps after dehorning. Photo: Sally Kneidel
Today's post on Bush warriors describes and has links to articles about collusion by "insiders" that is fueling South Africa's growing rhino crisis. To read the informative post on the Bush warriors site, click here.

See also one of my previous posts about rhino poaching in South Africa, following my investigations there in 2009 and 2007.

And check out TRAFFIC: the wildlife trade monitoring network, a great source of information about poaching and the illegal trade in wildlife and wildlife parts, worldwide.