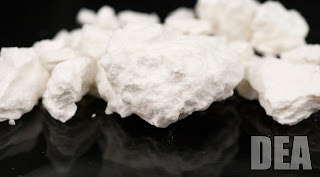 Cocaine.  Photo: DEA
Are recreational drugs more enjoyable for women than for men? A recent study on that topic caught caught my eye this morning.


Women are more sensitive to cocaine

"Human studies of cocaine dependence indicate that women enter drug treatment faster than men and report shorter cocaine-free periods," said scientist Kerry Kerstetter of the University of California, Santa Barbara. These and other observations indicate that human females are more sensitive to cocaine, have a greater cocaine craving and are more likely to relapse than men.

To explore this question in more depth, Kerstetter turned to lab rats. She trained rats to press a lever to get food and a different lever to get cocaine, then gave hungry rats a choice between the two levers.  The hungry female rats chose the cocaine lever about half the time.  But hungry male rats showed a definite preference for the food lever. The gender difference was statistically significant.  "It appears that females are more likely than males to sacrifice food for low doses of cocaine," Kerstetter said.


Female hormones may be responsible

No one knows the reason for these gender differences yet.  But Kerstettler believes that female hormones play a role. Female rats that had their ovaries removed after puberty behaved more like males, choosing food more frequently. Kerstettler and her colleagues believe female hormones may set up or regulate the response to cocaine in the brain.

On a practical note, Kerstettler and other neuroscientists believe that understanding gender differences can help individualize the treatment of cocaine addiction.