We are family: new evidence of our close link to chimps 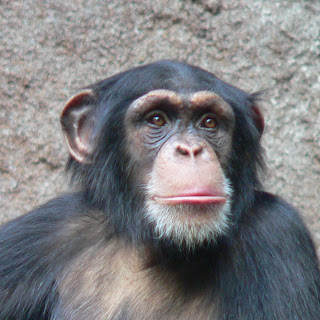 Photo: wikimedia commons
People are good at detecting human personalities accurately, even from expressionless mug shots. A study last year showed that we can reliably tell who is extroverted, emotionally stable, agreeable or imaginative - just from their blank and expressionless faces.


We can read chimps too

A new study shows that we can also predict personality traits accurately from expressionless photos of chimps!  In the new study from Bangor University of Wales, 139 college students looked at pairs of chimpanzee mug shots.  In the photos, the chimps looked straight ahead or at a slight angle with no teeth showing and no shadowing over the eyes which could make them look threatening. Sixty to 70% of the students accurately identified which chimps were dominant and which were not.  Accuracy was better with male chimps than females.

The researchers, led by Robert Ward, say they don't know exactly what characterizes the face of a dominant chimp or an extroverted person. Ward suspects that chimps can detect the difference too.  He plans to test that next.

What's the significance of these studies? The researchers conclude that the ability to detect important personality traits from facial structure (not expressions) evolved 7 million years ago in a common ancestor of both chimps and humans.  The fact that humans can read chimp facial expressions suggests that this ability is "part of an evolved system."

Chimps are our closest relatives, sharing 98% of the our DNA. It's not too surprising that we should able to read their faces in the same way we read human faces.

I'm always glad when I see a study like this.  I have this fantasy that once we realize how smart and how like us chimpanzees and other great apes are, the tide will turn on protecting our ape relatives from impending extinction.


For more information about what you can do to protect wild apes, see these links to primate conservation NGOs:


Some of my previous posts about primates and primate conservation:

Is males' attraction to trucks and balls genetically based? Jan 14, 2011
Hunting may threaten orangutans even more than habitat loss Dec 6, 2010