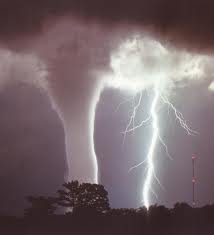 Photo: noaa.gov
April's 297 devastating tornadoes were unparalleled in the U.S. Of the four biggest tornado clusters ever recorded here, two occurred this past April. What caused so many deadly and tragic tornadoes in a single month?

Meterorologists say chance is partly to blame. One little thing can set off a tornado, or not.

We do understand a lot about factors that cause tornadoes, though. They need warm, most air interacting with cooler, faster air. A thunderstorm coupled with something to create rotation, such as wind shear, can create a tornado. Are those conditions occuring together more often these days?

Changing climate is partly a factor, say meteorologists. Jet stream forces in April were among the strongest ever recorded, contributing to wetter, stormier weather than usual in the middle of the country. (I wrote a post recently about how warming Arctic air has sent the circumpolar jet stream shooting off southward, leading to the massive snow falls the U.S. experienced this winter.)

The stormier April was also caused in part by warm air from the U.S (warmer than usual due to climate change) colliding with cooler Canadian air - conditions that can spawn tornadoes.

Population growth and pavement contribute to number of tornadoes

More people are living now in "Tornado Alley" - the nation's midsection and the South - so more tornadoes are observed and recorded.

Some of the states hit hardest by tornadoes this year were also among our fasted growing states - such as Texas and North Carolina. The South has grown 14.3% in the past decade, compared to 9.7% for the nation as a whole. According to Kirk Johnson of the NYT, much of that growth occurred in areas of flood plain, where water used to spread out and be absorbed. But now that the areas are developed and paved, water runs off quickly, heated by the pavement, and is much more likely to cause floods of warm water. The evaporation of warm water can lead to storms, and collisions of air masses of different temperatures and densities. Ingredients for tornadoes.

Climatologists have long predicted that climate change will lead to stronger storms as we head into the future. Apparently that will include not only hurricanes, droughts, blizzards, and floods, but also tornadoes.

Is that your picture? Simply FABULOUS - I mean from a purely artistic point of view - I know the global warming and climatic conditions are changing so much and they are foreseeing a number of natural disasters of gigantic proportions in the years to come - Kind of linking in with the end of world theories!!Each day is a blessing to be enjoyed to the fullest.

It is a great pic, you're right! I wish I could take credit for it. But it's not mine. It's from the US gov. From the National Oceanic and Atmospheric Administration. That's what noaa is in the caption. Thanks for your comment.