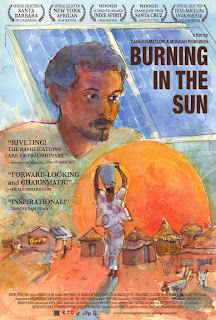 "Burning in the Sun" featuring Daniel Dumbele. Note the film-festival awards across the top.
My husband loped into the living room while I was watching the DVD, "Burning in the Sun". He had hoped to turn on a baseball game, but he stopped, watching a scene on the DVD. After a minute, he sat down.

"It's a documentary I was asked to review," I told him. "It's the best film I've seen about solar since Jeff Barrie and 'Kilowatt Ours'. About this young guy in Mali who makes solar panels by hand and distributes them to villages that have no electricity. It's really good."

Ken stayed and watched the whole thing with me.

Charismatic Daniel yearns to help his country
"Burning in the Sun" is the most memorable environmental documentary I've seen in a while. But it's also a compelling personal story that would be interesting even if the star, charming Daniel Dumbele, were selling shoes instead of PV panels. It's a plug for non-polluting, affordable solar power, but it's also about parental influence, about youth struggling for meaningful livelihood, about West African rural culture - all of which are fascinating to me.

Can't help but love this lad: equal parts European and West African
Daniel was raised in Mali by his European mother after his West African father died. Growing up, Daniel helped his mother install 350 wells throughout inpoverished rural Mali, saving lives by providing clean and safe drinking water. Said Daniel, "For me, it's nice and normal to be trying to help my people." At the age of 26, Daniel decided to start his own project: he learned how to make solar PV panels for $200 instead of the usual $1000, by piecing together broken PV cells discarded by American corporations. He uses all local materials to make the panels, except for the broken PV cells he carefully trims and fits together like puzzle pieces. 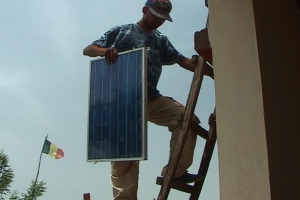 Daniel hoists a panel he made to a rooftop in Mali
As the DVD unfolds, Daniel sets out to distribute the completed panels, with more requests for them than he can fill. He focuses first on the village of Banko, holding a workshop for local people to teach them how to install the panels and set up the wiring. He's assisted in the beginning by a solar physicist and a female solar engineer, as he masters the circuitry for getting energy from the panel to the lightbulbs - which turns out to be quite simple. Click here to see a film trailer.

Daniel's panels profoundly affect students' exam results
After Daniel's efforts, the school in Banko is illuminated for the first time, and the students (girls and boys) flock into the brightly lit room in the evenings to do their homework.  The film tells us that the year before getting lights, only 20% of the Banko children passed their national exams. The year after, 97% passed!

Micro-loans make panels affordable
Daniel explains that he plans to sell the panels in the city, where customers will have to pay him cash. Then he will be able to offer "micro-credit" or "micro-loans" to the rural villagers, most of whom are farmers, allowing them a year to pay him back for their panels. Or even allowing them to barter for the panels.

Daniel finds a way to help the world while supporting himself  - a feat that still eludes me
The documentary caught Daniel at precisely that point in this life where he's trying to figure out how to help his people in his own way, while at the same time making a living. As a mother of two twenty-somethings myself, I was moved by Daniel's search for livelihood. I also know from my own struggles that it's not easy to make a living by serving a cause. I still haven't figured out how!

Afriq-Power attracts big clients
Daniel is making it work. In 2006, his company "Afriq-Power" opened a storefront in Bamako, Mali's capital city. His clients now include USAID, Geekcorps, and the US Embassy. Daniel's company electrifies health centers and schools, and installs solar-powered pumps in rural Mali. Daniel recently won a $30,000 contract to build 400 panels to power radios in Malian villages.

Ken's students were intriqued by the DVD
As I watched the captivating story of Daniel's journey, my husband Ken was sucked into it too, and forgot all about the baseball game he'd intended to watch. Ken was so enraptured with the DVD, he watched both versions (83 minutes and 22 minutes), and then took the film to work to show his classes. The next evening he told me that it had sparked class discussions about the association between the education of girls and reduction of birth rates, about the concept of microloans, about the diversity of races at work on the project and the inclusion of both genders as solar "experts". Most of all, after studying global poverty in the abstract, his students really enjoyed the personal nature of "Burning in the Sun." Me too!

I strongly endorse this film
I recommend this inspirational and informative documentary to anyone - for personal viewing at home, to fuel family discussions, to illustrate multiple issues to students - poverty in developing nations, grass-roots solutions to our environmental crises, communities working together learn new technologies. "Burning in the Sun" is perhaps the most fully-fleshed out documentary I've seen yet - a very human story about the monumental problems that threaten our planet.

For more information and a way to contribute, see the website for the film.

What a BEa-U-TI-ful review, Dr. Sally! TY for the wonderful insight and positive vibe.

I think this is a must watch! Thanks!

I'm the co-director of the film. Thanks for your wonderful review and interest in our film. My dream is that it will spark conversation about renewable energy in both the developing and "developed" worlds, and it is great to hear about that happening in your husbands class.

Thank you for your comments. Morgan, if you have more documentaries you'd like reviewed, send me an email at sally.kneidel@gmail.com. Or if you need other assistance with a film. Eco-documentaries (or on poverty) are my fantasy pursuit -