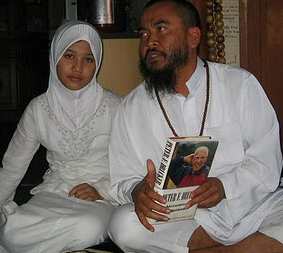 12-year-old Saudi bride (photo from Al Nafjan article)
Some of this post is drawn from "Child Marriage: It's Still Legal in Saudi Arabia" by Eman Al Nafjan, of Rijadh. Al Nafjan is the author of the Saudiwoman's Weblog, a blog on Saudi society, culture, women and human rights issues. Her article appeared in the email newsletter, Arts and Opinion, last week.

When I finished writing this post, finished reading the articles I've linked to and looking at pictures of child brides on Google Image, I straggled into my kitchen and just slumped against the wall, weeping with sorrow and anger. I came back to my computer after a few minutes and looked at one more site that made me feel some hope - Million Women Rise.  Readers, please leave comments about other sites and organizations that are working to empower women or to protect young girls (and young boys) from abuse - I need to hear it! Sally Kneidel

Saudi girls can be married off at any age

Saudi activists have been pressuring the Ministry of Justice to outlaw child marriages and to prosecute parents who "allow their children to be raped under the pretense of marriage." In April of 2009, the Ministry issued a statement that it was working on legal changes to protect young girls from this abuse. But according to last week's Arts and Opinion newsletter, the only legal change so far is a blank on the marriage certificate for the age of the bride. Any age is acceptable. 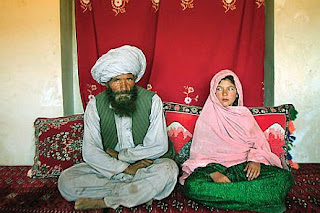 A Saudi social worker interviewed by the capital's newspaper, Al Riyadh, said she knows of 3,000 cases of brides 13-yrs-old or younger married to men the age of the bride's father or grandfather. Why do parents turn their daughters over to pedophiles, knowing that rape of a young girl can inflict permanent and even fatal physical damage, as well as psychological trauma? Intercourse with an immature girl can and often does cause a fistula - a tearing of the tissues that separate the bladder and rectum from the vagina. Without surgery to repair it, a fistula leads to life-long leaking of urine and feces from the vagina, which causes infections, can cause kidney failure and death. (Rape, especially violent rape, of adult women can also cause fistulas. As can prolonged childbirth, or any birth for an underage mother.)

So why do parents give their young daughters to much older men? One reason is to get the dowry paid to the parents by the groom. Another reason is cultural...


Having an unwed daughter is perceived as culturally risky

"Girls are seen as very risky in Saudi Arabia because they can later shame the family name by sleeping with someone,” Al Nafjan explains. “So families often marry off their girls at a young age so they can’t shame the family. It’s particularly common in cases when you have people from the lower economic status who get divorced,” Al Nafjan says. “The father usually wants to keep the boys, because culturally they are not seen as risky, and doesn’t want to give the daughters to the mother out of spite, so he just marries them off to the first person who’ll pay. In all the cases that have gotten the attention of local newspapers it was because either the mother or the aunt made an issue of it."

Nafjan describes the marriage of a 65-year-old man with hepatitis B to a healthy 11-year-old girl. She reports another case involving a 12-year-old girl who was sold by her father into marriage with an 80-year-old cousin for the equivalent of $22,600. The girl had to be taken to the hospital after the wedding night. Saudi women's rights activists are outraged at such cases but powerless to do much about it, if the parents are in favor. A wedding officiator may object as well, but apparently has no legal grounds to refuse to perform the wedding.

I came across this book several times in researching this post. I haven't read it but it looks intriguing. Amazon has more information about it. 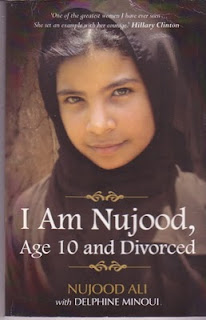 For more information about child marriage, see Al Nafjan's article as well as these links to other articles:

Yemen: "I'd Rather Die than Go Back to Him"

I Am Nujood, Age 10 and Divorced


My previous posts on child marriage:

Its to bad for this arya samaj go ahead in india so they need to do like that. Arya Samaj Mandir in Delhi NCR, Arya Samaj Gurgaon