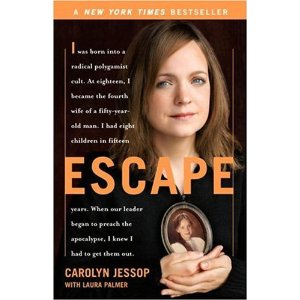 "I have a corner in my state that's worse than the Taliban" said Utah's attorney general Mark Shurtleff.

That corner of Utah (and adjoining Arizona) is the subject of this engrossing and shocking book by Carolyn Jessop, a brave young mother of eight who managed to escape the oppressive and totalitarian cult headed by Warren Jeffs. You've probably heard of Jeffs, who made the FBI's Ten Most Wanted List in 2006 for alleged sexual conduct with minors, incest, accomplice to rape, arranging illegal marriages between his adult male followers and female children, and other sordid activities. 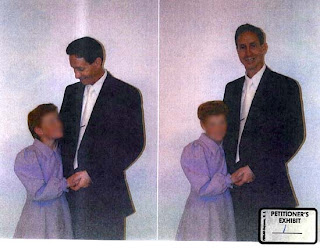 Warren Jeffs and one of his 12-year-old brides

Married to a stranger 32 years older

But the book is not about Jeffs, he's just part of the horrifying backdrop. The story is Carolyn's memoir, moving through her childhood within the cult, where parents were encouraged to routinely beat their children, and her vivid descriptions of her arranged marriage at age 18 to a 50-year-old stranger.

I thought I knew a little bit about polygamous marriages from watching the tame and amiable reality show "Sister Wives" on the TLC channel. The world of the cult that Carolyn grew up in, the FLDS, is another ballgame entirely. I was stunned by Carolyn's retelling of her married life to a power-hungry bully with growing numbers of wives and dozens of children, a life ruled by constant fear of physical and emotional abuse of her children and herself. Wives were forced to compete for the husband's favor, or watch their children suffer. The husband's favorite wives were free to beat, torment, starve, and humiliate the children of the less favored wives. His preferred sexual partner could expect at least some protection for her own children, so competition among the wives was fierce. Wives who displeased the husband were treated no better than a dying chicken in a hen house: shunned, verbally and physically attacked, even left on the side of the road. Teenage boys who might compete with old men for prospective brides were also left on the side of the road outside the community, with no resources whatsoever.

The scenario makes no sense unless it's seen in the bigger picture - almost all the people in Carolyn's world grew up in the cult and had virtually no exposure to the outside world or media, and little education. Even the police in the town were part of the cult, like a Twilight Zone nightmare. Women's cars had no license plates to keep them from leaving town. Most of the women were faithful to the cult: brainwashed to believe that their eternal salvation was directly dependent upon their obedience to their husband's wishes. The ego-maniacal men were told that they would be gods in the afterlife, each with his own planet to rule over as king.

It's a story of human weakness, cruelty, greed for power, and gullibility that challenges belief. And yet Carolyn leaves no doubt that every word is true.

The best thing about the book is Carolyn's detailed narration of her gradual awakening to reality and her growing determination to protect her children.  We move with her through the events that convinced her she was living in an increasingly dangerous world of lies, delusion, and deadly oppression.

And then the night of the escape! She waited patiently for the confluence of circumstances that would maximize her chances of success - the time finally arrived in the middle of the night. Her husband out of town, Carolyn stuffed all of her baffled, brainwashed children into the van with no license plate and careened out of town. Carolyn was the first woman ever to escape the FLDS with all of her children, to survive the subsequent legal assaults of her high-ranking husband, and to win custody of all her children.

I love this woman! What a role model for taking control, where none was offered. For throwing herself bravely into uncharted territory. For winning, and for writing to inspire the rest of us with her stunning tale of victory over the lowest of the low - men who live to abuse and degrade those weaker than themselves.

Yay for Carolyn Jessop! If you want some riveting reading, grab her book.

I just saw on Amazon that she has a second book, Triumph: Life After the Cult, published in May 2011. I'll be reading that one as soon as I can get my hands on it.


Links to some of my previous reviews of books and documentaries


Posts about child brides in Afghanistan and Saudi Arabia

The FLDS went off my radar until you reminded me about Carolyn Jessup. Truly a remarkable and inspiring story and a book I look forward to reading. And thanks for the links to further info on FLDS. This is a great blog Sally.

What about the black Israelites in Israel who are also polygamists? The women have no rights, are underage when married, and basically live the same oppressed lifestyle. Why is this not publicized more? That abuse needs to be addressed as well.