Review of new vegetarian cookbook "Veggiyana: the Dharma of Cooking" 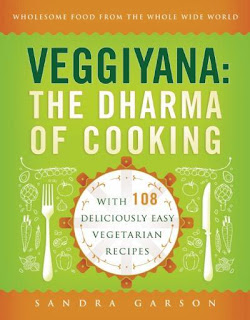 I was asked to review an unusual new cookbook, Veggiyana: The Dharma of Cooking, just released this month. The book by Sandra Garson is a blend of recipes from around the globe and short narratives about the author's food experiences or perspectives. It would be a great gift for someone interested in international cuisine, Zen Buddhism, or the origins of vegetarian staples, such as rice, pasta, and tofu.
I like the idea of such an eclectic mix of recipes. Some are simple enough, others more complex. I especially enjoyed Monique's Marinated Mushrooms (from Provence), Piro Aloo: Spicy Potatoes (from Kathmandu), and Volteados: Guatemalan-Style Black Beans. These three were very tasty and fairly easy; they also used commonly-found ingredients. Some recipes in the book have ingredients that could be hard to find, such as pomegranate arils, a daikon, Chinese dried tofu. An adventurous cook might be excited by this, but I'm more of an expedient cook, not very willing to search.
Vegan? Low-fat?
If you're vegan, take note that a fair proportion of the recipes in Veggiyana include dairy products, and several require eggs. I imagine plant-based milks and egg-substitutes could be used instead. As for fat, the author makes no claim that the dishes in the book are low-fat, and quite a few do call for several tablespoons of oil, butter, or ghee.
What is Dharma?
I enjoyed reading the passages in the book about the author's travels in Asia, particularly her efforts to improve the diet of malnourished children in a Nepali boarding school and the diet of Buddhist nuns in a Kathmandu abbey. The author is a student of Zen Buddhism and thus the book has a Buddhist flavor, with several one-line quotes from Buddhist teachers about the connection between a healthy body and a healthy mind. But for me, it stops short of actually delivering much Buddhist philosophy beyond the short quotes and the author's good works in the Nepali school and abbey. At least, that's the case with the "abridged advance" version for reviewers that I was sent. At first glance, I assumed that a book with "Dharma" in the title would include lots of guidance (that I need!) on pursuing enlightenment or at least serenity. Something along the lines of "present moment, wonderful moment." I was hoping for tips on how to keep my mind in the present while chopping vegetables, rather than engaging in my usual mind-wandering. My dear friend Therese Fitzgerald, an ordained Zen priest who co-founded the Buddhist church "Dharma Friends," defines Dharma as "the body of teachings of awakening." I don't see much about awakening in my abridged copy of Veggiyana. I do, however, see some promise of guidance in the Table of Contents for the complete book - the version you would get if you bought the book. I see "Perfecting Perception: Chocolate as Dharma Practice" and "Generosity: Learning through Food" - both are one-page essays that sound like insights into right living or healthy thinking.
A classic Zen cookbook compared
As I read through Veggiyana, struggling to describe it concisely and accurately, I keep thinking of my favorite Zen cookbook, The Tassajara Bread Book by Edward Espe Brown. Ed was the head cook at a Zen monastery in California. This book was first published in the 1970's, but is still offered on amazon.com - a testament to its timelessness. My copy is torn and stained, but I continue to use it because the slim volume cuts right to the chase - no frills, no embellishment. Although there's very little in the book about Ed or Buddhism, it somehow oozes a sense of living and eating simply, savoring the present moment. By its very simplicity, it models simple living. Veggiyana is different, for me, in that regard. Which is better? Ed's book might be better to hang onto for years, might be more utilitarian for cooks. Sandra Garson's book might be better as a gift, perhaps more entertaining for leisurely perusal.
A unique book
I appreciate Garson's efforts to convey her experience of Nepal and the value of wholesome food in living a wholesome life. I like her celebration of the rich variety in foods around the world. I do recommend this book, especially for those who already have a number of cookbooks. With its mixture of narratives and foreign recipes, this cookbook is unlike any others I've seen.
Veggiyana: The Dharma of Cooking will be available from Amazon in paperback on September 27, just in time for some early holiday shopping.
Keywords: Veggiyana The Dharma of Cooking Sandra Garson book review vegetarian cookbook Asian cookbook Nepal cookbook vegetarian recipes Asian recipes Nepal recipes international recipes Zen Buddhism Zen Buddhist book Tassajara Bread Book Therese Fitzgerald Dharma Friends Edward Espe Brown
Posted by Sally Kneidel, PhD at 11:59 AM