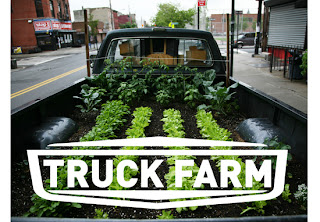 "I was trying to find a way not to lose my lonely mind....I decided what I needed was more vegetables...." sings a plaintive male voice, as filmmaker Ian Cheney wanders through bleak urban scenery.

From this somber opening scene, the film "Truck Farm" takes a sharp upbeat turn. What follows is a joyful and info-packed movie about urban gardening....in some very unusual places. I thoroughly enjoyed this odd documentary with its wacky mode of delivery and intriguing cast of characters.

The first of those characters is Cheney himself, who grows an organic "farm" in the back of his old pick-up truck in NYC. He creates his garden bed with the expert assistance of "Greenrooter" Victoria Foraker. The two of them explain the various layers laid down between the truck bed and the soil - to keep roots from penetrating the truck, to retain and drain water, and to prevent erosion. The top layers are light-weight soil and garden soil. After planting, Cheney installs a time-lapse camera to capture the lush growth of his truck garden. His customers later in the film include well-known nutrition scientist Marion Nestle and chef Daniel Barber, who both praise the truck's pristine vegetables.

I really liked the next entrepreneur profiled in the film, roof-top farmer Ben Flanner - he quit his E-Trade job to take a financial risk on his roof garden. Flanner said he'd been advised by friends to seek more stable employment, but he hoped the roof-top enterprise would be his stability, and planned to take on another roof.

The film features a garden on a small barge, as well - "The Water Pod." Four people live on the boat for 6 months at a time, while traveling to 5 locations in NYC. The boat provides all the boaters' food, shelter, water, and showering.Says "Living Systems Director" of the Water Pod, Carissa Carman, "People see it as an avant-garde approach to an oasis. Taking it to a whole new level."

Also interviewed is Britta Riley of "The Windowfarm Project." She introduces viewers to an economical system of pipes, pumps, and 25 plants spanning a vast picture window, a system that can be adapted to any sunny window.

In the Red Hook section of Brooklyn, Cheney explores a community farm that occupies a former asphalt playing field. Now the farm generates produce that costs less than a store would charge, and pays a salary to the neighborhood teenagers who tend it.

Local will be crucial at the 'end of oil'

The film is a feel-good experience - the projects are all producing wholesome food for motivated city-dwellers who care about their health. The movie is especially valuable in creating models for under-served urban populations who lack access to farmers markets and other affordable organic-produce outlets. But the film has relevance far beyond the present day and beyond unequal distribution due to retailers locating in prosperous neighborhoods. Here's the bigger picture. When our civilization runs out of oil in approximately 40 years, local food will be a must for everyone. VERY local. We won't have the fuel to truck produce across the country, or even across town. We won't have fuel to manufacture vehicles, or to construct grocery stores, for that matter. We'll have to get creative about how to grow our own food then, especially in urban and suburban settings. I'm glad someone is experimenting with different methods now.

I loved this creative and inspirational film. Truck Farm, with its songs and silliness, is a piece of the solution - a piece that will loom larger as the end of oil approaches.

I recommend it for classes, families, or general entertainment. The DVD is available from Amazon and from the website.