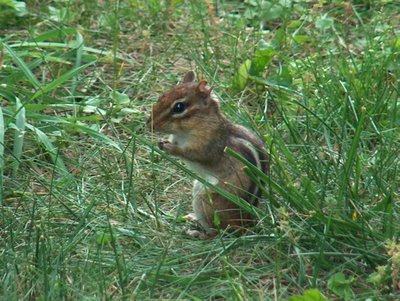 I have to write about our favorite rodent again. This is a picture of our chipmunk matriarch, Notch - named for the notch in her left ear. She lives in our front yard. She chased away two of her almost-grown younguns, letting the third one take ownership of a hole on the edge of her 22 hole underground network. The other two she ran off completely. I watched her chase them repeatedly until they didn't come back. She was tired of nursing them, I think. I could see her nipples shrink back to normal after they left. Notch - what a fiesty little critter! Every afternoon she sits up tall on her haunches, like a meerkat, and surveys her queendom for an hour or two, looking for interlopers. Sometimes one of the cotton rats from the meager "woods" behind the house straggles into the front yard looking for morsels in the grass. If Notch sees the rat, look out! Twice we've watched her light into a rat twice her size, flipping both of them 6 inches into the air. She's a wild woman!

The neighborhood cats are still on the loose. The city gladly brought us out a live trap for the cats. Animal control will deliver and pick up the traps, and take away any cats in the trap. But the cat-owning neighbors saw it being delivered and got very upset, said they'd turn us in for parking on the street if we used it. Parking on the street is not illegal.... But we decided to hold off on the trap until the dust settles. We don't want to alienate the neighbors entirely. Meanwhile they got the collars with bells for the two Siamese cats. They're trying. I haven't told them that, according to the American Bird Conservancy, cats learn to stalk without ringing the bell. I did however deliver the kitties' prey to their front lawn a couple of days after they got the bells, so maybe they'll see for themselves.

What's interesting though is that I've talked to five other neighbors on my street in the last week, and on one street over, who all have major complaints with these same wandering and marauding cats. Three neighbors complained that the cats attack their own pets - both cats and dogs. Two neighbors complained specifically about bird attacks - on a nest of towhees and a nest of mockingbirds. Another neighbor complained that the cats poop in her back yard and her dogs eat it. All of them said they would participate in some sort of group effort to curb the cats.

One neighbor told me that anyone can act as a foster parent to animals from the animal control office, through the Humane Society. For free, all the animals' expenses paid! This is my next door neighbor. Her family gets animals all the time and keep them for a couple of weeks, then take them back. (They have two dogs of their own.) She said that keeping the animals as foster parents makes the animals more adoptable later for some reason. Because they leave notes about what a well-mannered pet it was or something? I'm not sure. Anyway one option for us, in the quest for cat control, is to get a dog for a few weeks. When we had our dog, the cats rarely came in our yard. But we didn't have many yard animals either. Not because the dog caught them, but because her activity kept them from settling here. I like the rodents and the birds. I saw a possum in the yard about a week ago, in broad daylight.

I know that one day, soon, the cats will get Notch. I found a cardinal wing in my next door neighbor's yard today - a cat victim no doubt. My husband the ecologist said, well at least Notch has already reproduced. I just hope I'm not watching from my writing table in front of the bay window when it happens. What should I do? Put out the trap and let the neighbors be mad? And when I catch the cat, what should I do with it? Return it to the neighbors? Or call animal control to come get it? I'll probably only get one chance, because I doubt the cat will go in the trap twice. I will have to tell the neighbors before I set the trap that I'm doing it. So they'll have the option of keeping the cats indoors, and so they can be prepared to pick up kitty and pay whatever it costs to get kitty back. I'll tell them if animal control takes kitty away, and I'll also make sure that the cat will be held there safely for several days awaiting retrieval.

In case you didn't read my last post on this subject, domestic cats in the US kill hundreds of millions of songbirds every year, many species of which are already threatened by habitat loss. Domestic cats also kill a billion small mammals every year, in the US. (US Fish&Wildlife data.) Thirty-five percent of cat owners keep their cats indoors all the time. Two-thirds of vets recommend that cats stay indoors all the time. Indoor cats have a life span of 15-18 years; outdoor cats only 3 years. If you want more stats and sources of official info about cat predation and bird conservation, see the previous post.

Askinstoo said...
This comment has been removed by a blog administrator.
1:21 PM

Hi all
It is a good idea to start using enviromentally safe and animal friendly (non-toxic) substitutes when grooming your dog. You must groom your dog's whole body including the legs, tail and underbody if you want to do it right. You must groom certain dogs from the skin outward to truly be effective in taking care of their coat of hair and keeping it healthy. Comb through the unseen healthy hair and remove the shedding hair; this is what most groomers do first before cutting your pet's coat. You must groom some animals all at once, while some other animals have so much hair that it is easier to do a little at a time each day.
http://www.pet-grooming-boarding.info/