The Wildlife Trade, Forestry, and the Value of Activism 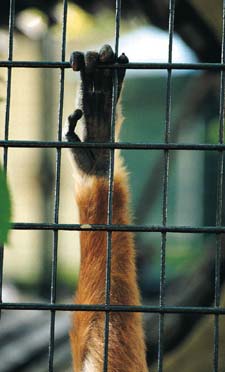 We've been interviewing scientists and environmental activists about the global trade in wildlife, for the new book. We've also been interviewing and reading about the conversion of Southern forests to pine plantations, which are chemically managed monocultures that have only 5% to 10% of the diversity of a native forest, according to Harvard biologist E.O. Wilson. A pine plantation is essentially a factory farm. By the year 2040, estimates a US Forest Service official, 70% of Southern forests will have been clear-cut and replanted as pine plantations. Most of those pines are being used to make paper and fiberboard for construction. One solution to that is use post-consumer recycled paper, use less paper, buy FSC certified wood products and SmartWood certified paper products. But more about that in a later post. Right now, I want to tell you about the wildlife trade, and the power of activism.

According to INTERPOL, the international police agency, the illegal wildlife trade is a $10-billion-a-year business, second only to drugs in the amount of money generated illegally. The animals are sold for food, for laboratory research, for exhibition, and for pets.

Here's what else I discovered last week that shocked me: The United States is the world's biggest consumer of wildlife, both alive and dead. We import four times more primates than any other country, most of which go into biomedical research or pharmaceutical testing. I guess I naively thought that all primates used for medical experiments were bred in captivity. And the World Wildlife Fund says that most of them are. But....we're still importing more than 20,000 a year. An imported wild-caught primate costs only one-third as much as raising a primate from birth in captivity. So some of those raised in labs are sold to foreign labs, and replaced with imports. Obscene! Corporations will just use whatever is cheaper, with no regard for the cost to the planet, or the sustainability of such priorities. I'm tired of seeing that over and over - with farmed animals, with the management of cropfields and forests for timber, with the crops and animals that provide our fabrics, and with unskilled workers, especially agricultural workers and garment workers in the Global South. It's ugly.

The fact that corporations' only true objective is to maximize profits for the shareholder is dangerous to the planet....but we have to remember that those profits come from us, as consumers. We can withhold our money from companies using the most egregious practices. Paul McCartney donates a lot of money to cancer research, in honor of his late wife Linda. But he stipulates that the money cannot go to research that's using animals. Paul has written that money spent on health education, prevention, and screening is more effective in combatting cancer than animal research is. Apparently a lot of the medical research is due to inertia - just using animals because we always have. Some of that research can be done on tissues rather than live animals. We can all start asking more questions of biomedical research companies and drug companies, especially if we're making charitable donations to these companies, or investing in their stocks. They all have web sites with phone numbers to call, and addresses to send letters to. When you get a prescription filled, or buy an OTC drug, ask the pharmacist for the name of the company that made it. Then call them or write them a letter. Ask them for transparency in their testing procedures - tell them you want to know what animals were tested with that drug, and how the animals were housed and treated. Transparency - it's a good word, I keep seeing it in articles about corporate deception. If all of a company's practices are legit and above board, then there's no reason to keep anything secret. When something is secret, then for sure something is going on that the public would object to - if we only knew.

More and more, activist organizations are sending people undercover to work in research labs, in cosmetics testing facilities, in slaughterhouses, in sweatshops. We're seeing footage of what goes on, and we're learning to make demands.

One thing I keep seeing over and over, as I research all these different topics on environmental and labor and humane issues, is that companies often give way as a result of activists' demands. I'm really starting to think that grassroots activism can be just as powerful a tool as trying to get changes the nice and orderly way, such as working with legislators to get new regulations passed. Long and loud protests, with lots of media coverage - companies don't like 'em. Activism has been responsible for a number of reforms in the timber and paper industry, and in the meat industry. Because of PETA's demands, McDonalds changed their policy for the egg factories that provide their eggs. Now the cages can have only 5 hens per cage rather than 7. The egg factory we toured for our recent book Veggie Revolution had 5 hens per cage, and they were too crowded to lift their wings. But with 7 in the cage, they would've been unable to budge at all. It's a small step, yes, but a step in the right direction. And if you're one of the caged hens, it's a significant difference. It's a change that signals a more cooperative corporate attitude - which means more change is coming. In the timber and pulp industry, activist groups such as Forest Ethics and the Dogwood Alliance have been able to get Home Depot to carry 'Forest Stewardship Certified' wood products, and also to stop buying wood from the world's 10 most endangered forests. See The Home Depot web site for details. We (Sara Kate) took part in the Dogwood Alliance demonstrations that got Staples and Office Depot to agree to several forest-conservation measures, including phasing out products from old-growth forests, and carrying post-consumer recycled paper. See the Dogwood Alliance web site for info on those successful office supply campaigns.

From the Dogwood Alliance, a description of their grassroots campaign to change Staples policies:

"On November 12, 2002, Dogwood Alliance joined office supply giant Staples Inc. in a joint press conference to announce the company's public release of landmark environmental paper procurement policy. This announcement marked the end of a two-year campaign led by Dogwood Alliance and our partner ForestEthics and involving dozens of local, regional and national groups and thousands of individuals. Collectively, we generated over 600 demonstrations, 15,000 postcards, thousands of phone calls to the corporate headquarters and regional offices, hundreds of letters from concerned citizens, coverage in more than 10 national media outlets and over 50 local media outlets, introduced a shareholder's resolution, generated a letter to the CEO signed by over 150 religious leaders, and produced a public service announcement with the rock band R.E.M. This campaign victory is testament to the power of citizens joining together to demand corporate environmental accountability."

Now, when we go in Staples, we can buy post-consumer recycled paper. They didn't have it before. Scot Quaranda, one of the leaders of the Dogwood Alliance, says that they're working on new campaigns now with other companies that market forest products.

Being vocal and active can have results, especially when we join together.

But back to the topic of wildlife trade - another big piece of it is the trade in pet birds, especially birds in the parrot family - parakeets, macaws, and some others. They are extremely smart birds. One African gray parrot has learned to count up to 6 objects accurately and to learn language as well as chimps have learned it - combining words in new ways to ask for what he needs or to answer questions.

But parrots are in trouble. According to the 2002 IUCN Red List of Threatened Species, 94 of the world's parrot species are considered to be threatened with extinction, largely because of habitat loss and excessive capture for trade.

Although the smuggling of wild-caught birds into the US has declined since the Wild Bird Conservation Act was passed in 1992, USF&W officials estimate that as many as 20,000 birds are smuggled in every year, just from Mexico.

What can you do about that? If you buy a pet bird - be sure and double sure that it was bred in captivity. Ask for documentation. Or better yet, call your local Humane Society or Animal Control office and see if there is a sanctuary for homeless pet birds near you. You may be able to adopt one. Sort of like buying vintage clothes, or burning waste veg oil in your diesel tank - you're not creating a market for it, and you're helping an out-of-luck bird.

We can make a difference. Especially when we work together.

Askinstoo said...
This comment has been removed by a blog administrator.
9:01 PM