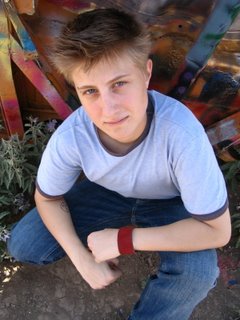 photo from Scott Turner Schofield's web site
Last night Ken and I went to see "Underground Transit," written and performed by Scott Turner Schofield. It was the most interesting show I've seen in a while - very well done. Turner's one-man show narrates his struggles with gender identity and the happy resolution. I was impressed with the writing and the performance, how easy it was to understand and follow the twists and turns of his personal journey. The show was intensely personal, but not uncomfortably so.

Turner struck me as a well-adjusted and happy individual, at peace with his own process, supported and nurtured by his family and the people he loves. In performing for the last 6 years, he has built up quite a supportive community of followers. In the Q&A session after the performance, he came across as open, funny, articulate, and predisposed to like everyone around him. He's successful, and I understand why. He's not bitter - rather his message seems to be to celebrate the diversity of humanity, including the transgender community. He also wants us to understand that gender identity and sexual orientation issues can be very painful for adolescents, leading to high rates of suicide. Although Scott was student body president at his high school, and "almost home-coming queen," his high school and college years were difficult. The particulars came through clearly in his show.

I came away from the performance feeling glad that the community of gay and transgender youth has such a charismatic messenger. I hope that Scott's success in his one-man shows catapults him into TV, where he can play a transgender character. He would like to do that. I can't imagine a better candidate than Scott, and I think TV is ready for such a consciousness-raising move.