Is It 2008 Yet? Bush Still Says Global Warming Uncertain 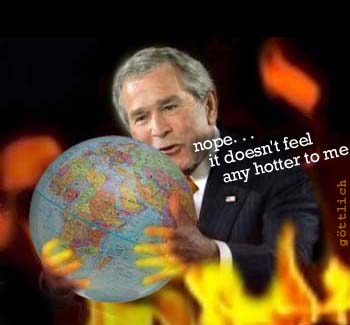 photo courtesy of www.mindfully.org
Best bumper sticker spotted this week: "Is it 2008 yet?"

I read in the NY Times this morning, July 8, that Mr. Bush continues to argue "that the science on global warming is too 'uncertain' to justify anything more than a voluntary effort to deal with it."

What does he need to convince him? NYC under water? For George's 6oth birthday this past week, Laura should have strapped him into his seat and forced him to watch Al Gore's movie on the subject, An Inconvenient Truth.

On the subject of climate change, I see that our administration is heavily in pursuit of corn-derived ethanol as an alternative to oil from the Persian Gulf. That's nice. E85, a fuel that's 85% ethanol and 15% gasoline, creates far fewer greenhouse-gas tailpipe emissions than straight gasoline. But not just any car can use E85. Only "flexible fuel" cars can at present, and they are relatively rare today. Of course, that can be solved. The technology exists. New incentives could get flex-fuel cars on the road, if we had the fuel.

But even if we could all use E85 right now, there's another more serious problem. Using corn ethanol does not actually reduce our consumption of fossil fuels. Rather, many scientists argue, using ethanol actually increases fossil-fuel reliance. According to the calculations of Cornell environmental-engineer David Pimentel, 29% more fossil fuels are needed to grow corn and produce corn ethanol than are saved by using ethanol as a fuel. In a "best case" scenario, says Pimentel, the trade-off is even.

How can growing and processing corn use so much fuel? Corn is fertilizer-intensive; fossil fuels are used in the manufacture of nitrogen fertilizer. Farm machinery used to till, plant, harvest, shuck, etc., burn fossil fuels. The trucks that haul fertilizers, seeds, pesticides, harvested corn, etc., burn diesel fuel. And so on. 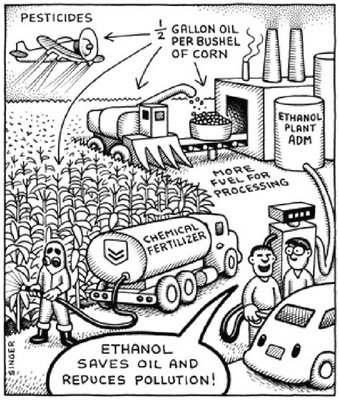 cartoon courtesy of Peaceworks Monitor, peaceworks.missouri.org
Corn ethanol has yet more problems. In order to replace the 1.6 million barrels of oil a day we're currently getting from the Persian Gulf, half of our country's farmland would have to be planted in corn destined for ethanol factories. Since 56% of our corn already goes into livestock feed....so that would be difficult. An economic forecaster cited in the NY Times predicts "a food fight between the livestock industry and this bio-fuels or ethanol industry" by mid-2007, over a limited corn supply.

I'm glad we're pursuing ethanol, but ethanol from corn is not the solution. Brazil is currently the world's leading producer of ethanol - from sugar cane - for a cost that's 30% less. But I don't know that sugar cane uses less land or less fossil fuels than corn, per gallon of ethanol produced. The real answer is cellulosic ethanol, produced ideally from waste plant matter, from farm waste.

At present we don't have the enzymes needed to produce cost-effective ethanol from cellulose. Cellulose is a structural molecule whose function is to hold plants upright, so it's a rigid and complex molecule, and it's tough to break down into the components of ethanol. Corn on the other hand is largely starch to feed the embryonic plant. It's soft and easily broken down.

Research continues for the purpose of developing new enzymes to break down cellulose, and we'll get there. Meanwhile, the Energy Policy Act of 2005 calls for the use of at least 7.5 billion gallons of ethanol in 2012. Although corn ethanol is not the ultimate solution, at least using corn ethanol now is creating an infrastructure for ethanol production and delivery, so that when the difficulties with cellulosic ethanol are unraveled, we can get it on line fast. Hopefully. Biodiesel and straight veg are great options for diesel cars, although only 3% of U.S. cars can use diesel.

In the mean time, I'm tapping my foot for 2008. Please, oh please, let us have an election where the person who actually gets the most votes can take the helm and guide us with some sense through treacherous waters. Imagine a president who would take responsibility for our role in creating the world's greenhouse gases, and lead the world in turning things around.
Posted by Sally Kneidel, PhD at 3:37 PM