We Saw One Humpback Whale: The Good and Bad on Whale-Watching 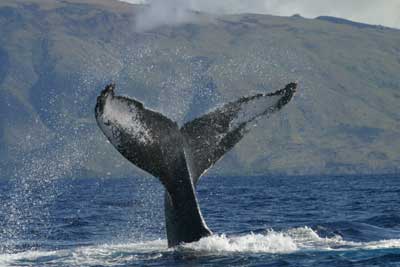 fluke of humpback whale; photo courtesy of National Marine Fisheries Service
www.nmfs.noaa.gov/.../humpbackfluke_hi_nms.jpg
We wanted to see Pacific marine wildlife, and in pursuit of that, we spent the last week of July at a hostel in Tofino, British Columbia - a small village on the wild Pacific coast of Canada's Vancouver Island. Tofino is on the northern edge of Pacific Rim National Park, halfway "up island" as the locals say.

The hostel is called Whalers on the Point Guesthouse (250 725-3443). It overlooks a relatively unpopulated bay where whales sometimes wander. The hostel has a rack of brochures for local whale-watching outfits that take tourists and photographers out to look for whales. The whales most commonly seen in the Tofino area are gray whales, humpbacks, and orcas. Most are migrating through seasonally. But a few are permanent residents. We learned from talking to various locals that two gray whales in particular spend a part of every day lounging in a specific area of sea kelp near one of the many small offshore islands, and have done so for years. Most of the whale-watching companies take their boats to view these two gray whales.

Whale-watching has good and bad aspects. The good is that it brings in around $10 billion in tourist dollars to North American Pacific coastal towns every year. Because a whale-watching outing usually includes viewing other coastal life as well - seals, sea lions, oceanic birds, sea otters, or bears - the income gives local people a strong incentive to preserve marine ecosystems. It gives coastal communities a good reason to leave enough fish to sustain wildlife populations. Ecotourism, which includes whale-watching, can be a sustainable way to "exploit" or make a living from natural resources without diminishing them. But it must have limits. Like all ecotourism, overzealous viewing is a hazard to wildlife populations. With that in mind, many conservation organizations and government bodies have published guidelines to limit and regulate whale-watching. The most widely accepted guideline is to approach no closer than 100 yards, the length of a football field. Another is to linger around a whale no longer than half an hour.

In my experience from staying in three different towns that cater to whale-watchers, these guidelines are generally respected. One boat I saw get too close was turned in by a whale-enthusiast who jotted down the boat's license tag or ID number. 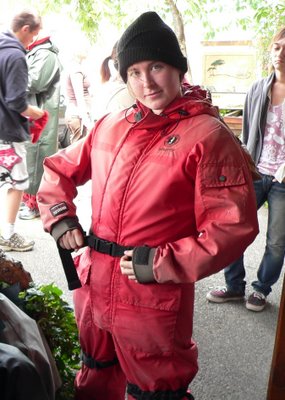 So anyway we chose one of the whale-watching groups in Tofino and went out in their high speed "Zodiac" boat to see the two resident gray whales. A Zodiac is a small pontoon boat that jumps and slams over ocean swells in transit to the whales. The boats are constantly in radio contact with each other, so if there are whales in the area, then the guide for a particular outing already knows exactly where the whales are. But the animals may be miles offshore so the Zodiac can take 45 minutes at full throttle to reach the right area. People with back or neck problems or pregnancies not allowed on the boats, with good reason. It nearly jolted my teeth out. A Zodiac holds about 10 people in addition to the driver. We had to wear orange jump suits that looked like space suits, as protection against the cold and as flotation devices. (That's Sara Kate Kneidel suited up in photo.) British Columbia is cool even in late July - out on the ocean moving fast the air was cold.

It turned out the day we went that the two resident gray whales had taken the day off and meandered who knows where. We didn't get to see them. But our guide took us to look at a resident humpback whale that had been spotted instead, farther offshore than the boats usually go. The humpbacks have nicks in their tail flukes that make individual identification easy for the people who study them. The one we saw was #117, said our guide.

When we reached the right spot, we could tell because two other small boats were already there, waiting. Our guide cut the engine - the noise can interfere with whale communication underwater. We sat and waited. I'm not sure what I was expecting - that the whale would breach or what. Someone the night before at the hostel had told me that humpbacks are much more playful than grays - breaching and tail-lobbing (slapping the tail on the water) and flipper-slapping and generally making a spectacle.

But the whale didn't do any of that. What the humpback did do what stick its fluke (tail) up out of the water as it dove to feed. The first time all I saw was a quick blur. We waited ten more minutes and the whale did the same thing again. I saw the fluke that time, but barely. The third time the humpback dove, he/she waved the fluke high up in the air and I saw it clearly. #117 had a big chunk missing from one side of its fluke. If you picture a tail or fluke as having two fins or blades on it, one of the blades looked like a big bite had been taken out of it. Our guide said it was likely that an orca (killer whale) which are common in the area in spring had taken a bite when the whale was a baby. I hope he was right. I hope to God it wasn't an injury from a whale-watching boat.

After the third dive, we left - our half hour was up. I don't know for sure if we were annoying the whale or not. I know that it could have left the area easily and we would never have known. In the intervals we waited, we had no way of knowing where the whale was, or if it was still there. As much as I enjoyed seeing it, I felt guilty too. Whether we annoyed it or not, I felt we were trespassing. Anytime I'm close enough to wildlife to get a good look, I'm probably invading its space in some way, even if I'm being respectful.

We saw a bear later near Tofino, foraging in the woods. A park ranger told me that anytime a bear sees a human it's becoming accustomed to humans in a bad way. He said we should yell and be obnoxious to help the bear develop a fear of humans. Bears that get too fearless start foraging in yards and then towns, and such bears eventually wind up being shot as a danger to the community. I saw a newspaper for the nearby town of Ucluelet while we were there, and it featured an article on the front page about two bears being shot by wildlife officers for foraging in garbage cans in town. Ouch.

As our human population grows (the U.S. will soon reach 300 million, if we haven't already), our relationship with wildlife grows more difficult and more complicated.

But anyway back to humpbacks. They're found in both the Atlantic and Pacific, grow to a length of 50 feet. They have long pectoral fins, nearly a third of their body length and a very small dorsal fin well back on the body. They are black except for the white throat, breast, and underside of fluke and flippers. Their flippers have fleshy knobs along the front border, says my "Field Guide to the Mammals" book by Wm Burt, and the fluke is irregular in outline along the posterior border - hence the ease of individual identification. The spout of a humpback is an expanding column of exhaled air and water vapor about 20 ft high, and the baleen (mouthpart for filtering krill or plankton out of seawater) is black. The shape and height of the spout can be important in identifying them, since that's often all the viewer sees. Gray whale spouts are "quick and low", about 10 feet high.

According to the Pacific Biodiversity Institute, the world population of humpbacks is now about 15,000 and is gradually increasing. They are on our federal endangered species list and have been since 1973 when the Endangered Species Act was first passed. Their world population was at one time around 200,000, but declined due to intensive commercial hunting which has since tapered off. The Northern Pacific population is now around 6000. If it reaches 9000, they will be removed from the U.S. endangered species list. 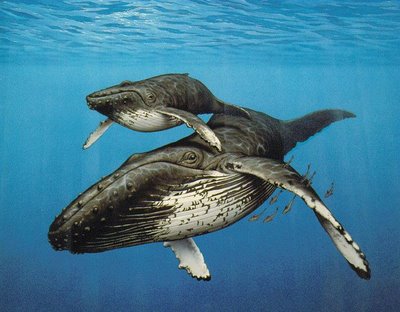 I would love to hear from readers your views about whale-watching and wildlife watching in general. The good, the bad and the ugly.
Posted by Sally Kneidel, PhD at 11:51 AM

Just a quick note, Zodiac is a brand name, not a type of boat. While Zodiac is a the inventor of the inflatable boat, both traditional and RHIB style, the name is often stated as a type of boat, just as kleenex is for tissue.

You probably don't care, but just thought I would clear it up as I have to on more than 100 blogs a month. Its tough being a Zodiac salesperson.

I Love the Web I Hope U Put More Real Pics Of Blue Whales. I Have A Contest To Do of This Endangered Species. I found all the information On this Website. I Want More!