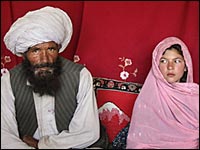 Eight-year-old Enatnesh stands by the door way of her Ethiopian home contemplating the recent marriage of her 12-year-old sister with a look of profound sadness. She says she would like to be a doctor or a teacher, but she doesn't think that can happen if she marries at 12.
She says she doesn't want to get married; she'd rather get an education. But, she says, "Of course, I can't decide to marry or not. The decision is under my family, my father and mother." (Brenda Wilson, NPR)

In many developing nations, rural girls marry very early, often as children. Brenda Wilson reports for NPR that up to 40% of girls in rural Ethiopia are married before the age of 15. The girls' fathers arrange the marriages, and the girls have no voice in the matter. Many are married by the age of 12, but are allowed to remain with their parents until they are 14, when they go to live with their husband's family. The husband is generally10 years older.

Today we talked with an Ethiopian woman who lives in our hometown. She said that even in the capital city of Ethiopia (Addis Ababa), girls are commonly married in their early teens. Child-marriage is most prevalent in the two most impoverished areas of the world: sub-Saharan Africa and parts of South Asia, including India and Bangladesh. See this document by the International Center for Research on Women for more data about child-brides.

Tradition plays a role in the persistence of this practice. Because so many girls do marry young, fathers fear that their daughters will be viewed as defective if they don't marry young, then no one will want them. Or they might be raped or abducted or become sexually active if they don't marry early, then - again - no one will want to marry them. Marriage, for girls, has been seen traditionally as the only way for parents to provide for their daughter's future.

But marrying early is bad news all the way around for the girls. Girl-brides are virtually powerless, easily manipulated, and extremely vulnerable to their older husbands. The incidence of domestic violence, abuse, and abandonment is much higher for wives who are married before the age of 18.

Child-brides are also likely to experience pregnancy and childbirth while they are still children themselves, an event which is likely to damage their bodies permanently. The CDC reports that many girls who give birth too early experience tearing of internal tissues during birth, leaving them with "fistulas," or internal chambers that should be separate but are no longer so. The walls of the vagina, large intestine, and bladder may be torn so that one opens into another. The girls may "leak" urine or feces continuously for the rest of their lives. Young brides in rural Ethiopia and in other developing nations often go through pregnancy without health care and give birth attended only by female neighbors or family members.

Forcing young girls to marry older men has repercussions far beyond the suffering and lost potential of the girls themselves. Girls coerced into marriage, whether by their fathers or by the circumstances of poverty and the absence of other options, perpetuate the cycle of poverty. Girls and young women with no education, no financial resources, no opportunities to generate income or improve their circumstances, are much more likely to have large families. They have little authority or autonomy in the marital relationships, and men in developing nations often want large families, to work the farm or for spiritual and traditional reasons. Young women with limited options may want large families themselves - children can give meaning to a life that is otherwise bleak.

There is abundant research to show that in communities with programs to improve educational and occupational opportunities for women, birth rates drop dramatically. That's important not just for those women, but for all of us on planet earth.

Worldwide population growth exacerbates all of our environmental problems on the planet. Although the number of humans on the planet will swell from 6 billion to 9.5 billion people by the year 2050, our land and other resources are not growing. In fact, our resources are shrinking due to overharvesting, overgrazing, pollution, and global warming.

Most of the growth in world population will occur in developing nations. In those countries, the subjugation of women is one of the biggest factors contributing to population growth. That subjugation is locked in place when girls are betrothed as children.

For more information about what you can do to protect young girls from arranged marriages, go to the web site of the International Center for Research on Women (www.icrw.org) or email info@icrw.org.