Technology transfer for the poor

My father, Douglas A. Weikle, a career journalist and, until his retirement in the 1990s, Asian desk director of the Lao service, USIA/Voice of America, spent many years covering the post war plight of developing East Asian countries.

During his several tours overseas, he came to understand that the inequitable distribution of technology increasingly was to blame for the discontent and rebelliousness, called aggression. His solution, which became an ongoing State Department program, was both practical and elegant, requiring corporations to share technology as a “cost of doing business” with underdeveloped nations.

Our feature editorial this week is by David Dickson, Director of SciDev.Net Harlan Weikle

Developing countries must adopt effective policies on technology transfer that meet the needs of all social classes, including the poorest. 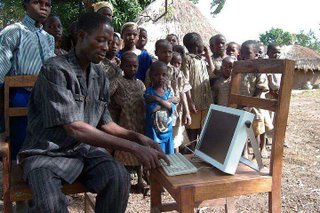 There is a common misconception that the single most important factor in science and development is the need for adequate funding for relevant research. This type of thinking — sometimes described as the 'science push' model of development — tends to focus on the proportion of a country's gross national product spent on research and development.

But spending on research is part of a broader picture. An arguably larger role is played by government policies affecting the practical application of scientific knowledge. This usually involves embedding such knowledge in technological products and processes, what is widely described as 'technology transfer'.

Technology transfer has in the past often been demonised in many development policy circles as a process by which multinational corporations become rich at the expense of poor countries — selling them products they cannot afford and keeping them politically subservient by refusing to license technical know-how.

But as developing countries have become increasingly integrated into a single global economy, such thinking has changed.

For regions like East Asia or Latin America, effective technology transfer, tapping into the scientific and technical knowledge of not only researchers in the North, but increasingly their own, is now recognised as essential to economic growth and social prosperity.

The importance of technology transfer, and the policy challenges it represents to governments in the developing world, is reflected in a new dossier launched by SciDev.Net this week (see Technology Transfer dossier). This complements the existing resource on research and development policy (see R&D dossier). Together, they span the spectrum of issues in the field of science, technology and innovation.

One important theme to emerge is that technology transfer has become a complex business, with many different actors. But, just as important, is the fact that society's poorest sectors are often forgotten in technology transfer debates. Debates raised by the poverty gap between rich and poor countries are being replaced by concerns about the gap within developing countries themselves.

This should come as little surprise. In practice, the private sector tends to provide the most widely used channels for technology transfer. This is largely because the most effective mechanism for promoting rapid technology innovation is the market, with incentives for entrepreneurs and rewards, through patents, for inventors.

But governments still share substantial responsibility for making technology transfer work effectively and in the national interest. They must, for example, invest in the capital and intellectual infrastructure needed for smooth technology transfer. This includes investing in university-based research and training, to ensure that a country has the knowledge and skills it needs to not only acquire but also use new technologies.

Governments also need to regulate all transferred technologies — these should not just be useful, but socially acceptable as well. Governments must develop public institutions that can make such a judgement, either by adopting international criteria (on safety levels, for example) or by developing criteria of their own.

But perhaps the biggest challenge governments face is actively developing forms of technology transfer that will directly benefit the poor. In some relatively rare cases, the utility of a new technology will be enough to reach all levels of society; the mobile telephone is perhaps the best example. In others, however, the needs of the poor are inevitably marginalised by procedures structured around the dynamics of the marketplace.

Take employment, for instance. As Ashok Khosla, of Development Alternatives in India, has pointed out, India is likely to see its workforce increase by 40 million over the next three years (see Exporting problems: arguments against technology transfer). The growth of new industries, such as information technology (IT), during this period may hold the key to the country's economic prosperity. But IT is only expected to create about one million new jobs, leaving the rest of the workforce to find traditional employment in areas such as farming or construction.

These sectors need new technologies that can create jobs, not displace labour. Such technologies are unlikely to be sufficiently profitable to attract the investment capital that flows into IT — particularly if, as Khosla argues, they are based on a commitment to sharing intellectual capital. But they are essential if countries like India are to avoid a growing gulf between the rich and poor, with all the social tensions that can result.

Various forms of creativity are needed. Some are purely technical; Khosla describes the success of various novel brick-making techniques in creating small-scale enterprises. Others require social innovation — by combining modern science with the practical experience (and good sense) of traditional communities, filling gaps left by the private sector in fields such as niche agriculture (see Agricultural technology transfer to developing countries and the public sector), or finding new ways of attracting investment without patent fights.

These activities should not replace conventional technology transfer. But they are more likely to provide the basis for a sustained attack on poverty.