Chimps and Gibbons Have Human Elements to their Language 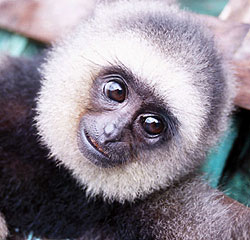 Researchers studying a population of wild gibbons in Thailand have found that these great apes recombine sounds to convey different meanings to one another, exhibiting a form of simple syntax.

The researchers, psychologists Esther Clarke and Klaus Zuberbuhler of the University of St. Andrews, claim that the ability to recombine sounds for varied meanings has not previously been demonstrated in apes. Their report was published in December of 2006 in the online journal PLoS ONE.

Before this study, psychologists had held that syntax developed in pre-historic people in response to a growing vocabulary. But this is not the case with gibbons, whose vocal abilities are limited. So perhaps previous theories about the development of syntax in humans will need to be reexamined.

The field studies of gibbon vocalizations, conducted in 2004 and 2005 with 13 groups of white-handed gibbons in Khao Yai National Park, focused on gibbon vocalizations for finding long-term mates and on vocalizations in response to predators. The research team recorded the two different kinds of songs. The songs provoked by predators began with soft "hoo" notes and included another repeated extra note, lasting altogether about 30 seconds. The mating songs were similar to the predator songs but lacked the "hoo" notes and the other extra note, and lasted only about 10 seconds.

Researchers played the recordings to other gibbons.

This study demonstrates that great apes share some of our own facility for vocal communication. 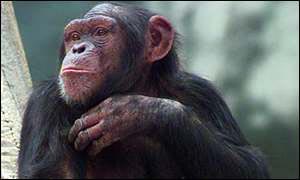 My Work with Chimps

Although this gibbon research has been heralded as a new discovery of the capacity in apes for complex communication, we have known for decades that apes are capable of complex communication. Their development of language is limited by less versatile anatomy for vocalization than we have. That is, their lips and tongues and soft palates, etc., are unable to produce as many different sounds as we can produce. But researchers, since the 1960s and 1970s, have been teaching American Sign Language to chimps and orangutans and gorillas. These apes can also communicate by way of computer keyboards. As can some parrots.

For 2 years during my graduate training, I worked with Dr. Roger Fouts at the University of Oklahoma in his pioneering work teaching American Sign Language (ASL) to chimps. I was just a graduate student basically working as a research assistant - I was an additional pair of hands to help carry out his research. The object of his research was to see how much American Sign Language chimps could learn, and to see whether they would use it spontaneously with humans and with each other or even teach it to each other.

The chimps I worked with were mostly Bruno and Booee, two youngsters who were about 4 years old. My job was to work with one of them at a time, to get the chimp to go through a binder we had of photos that had been cut out of magazines. Each page had a picture of some object, like food, a ball, water, a bird, a hug, etc. The chimp was supposed to do the hand sign for the object and if he did it correctly, he got a sip of Kool-Aid or some other little tasty treat. Maybe an M&M. Of course, the chimps did not much want to look at the binder of pictures. This act of looking a book did not resemble any normal behavior in their repertoire, and they did not particularly want my approval, so getting them to sit still with the binder was not easy. Imagine a young child with full blown ADD, but 10 times magnified.

In fact, unless the instructor such as myself was very stern with the chimp during the lesson, the language lesson often devolved into the chimp jumping up and running around. On a bad day, the chimp would sometimes run back and forth past me, "accidently" bumping into me as he passed me, to see what I would do. This was a standard sort of bluff that was really a challenge. The chimps did it to everyone on the premises, to test their boundaries. But I was afraid of the little guys, who were by no means full grown, but weren't all that little. More than one of the senior graduate students had missing finger tips from being bitten by chimps during lessons. The chimps had collars and a chain, and I was supposed to grab that and make the chimp sit down. But the collar was within range of their sharp teeth.

The chimps knew I was a wimp and so I seldom made much progress in the language lessons. After a year and a half of trying to work with the chimps, and then with the orangutans in the nearby Oklahoma City Zoo, I decided I wasn't that interested in the language abilities of captive apes. That is, I wasn't very interested in getting them to behave like humans. I was much more interested in the natural behaviors of wildlife. So I transferred to the University of North Carolina to study the field biology of woodland salamanders.

But at any rate, there was merit to Dr. Fouts' studies, and to the continuing studies of one of those senior graduate students, Dr. Sue Savage-Rumbaugh who went on to study chimps' acquisition of language for 23 years at Georgia State University. (She's now with the Great Ape Trust of Iowa.) Both Fouts and Savage-Rumbaugh, as well as many other researchers by now, have shown that many apes can learn more than 300 different signs. It may be up to 600 by now, I don't know. Not only that, but when I was in Oklahoma, the chimps that we were working with used the signs to communicate with us and with each other. They regularly asked us for food or drink or to play with the ball, or for a tickle. One of the mother chimps taught some of the signs to her youngster. And - here's the best part - one of the chimps we worked with combined words in a unique way to apply to new objects. It was a new word for "duck." Bruno and Booee and a few other chimps lived on a small island surrounded by a moat to keep them from escaping. There were ducks on the moat on occasion. The chimps did not have a sign for duck, but one of them put together the sign for water and the sign for bird to make "water bird," for the ducks! That convinced me that chimps do have a profound capacity for understanding and using language - they just don't have the vocal apparatus. Gorillas too have been demonstrated to have extensive sign language capacity. Koko was the first gorilla to show this; her researcher was Dr. Francine (Penny) Patterson, who has written at least a couple of great children's books about Koko.

I have to say that I don't particularly approve of coercing chimps or any primates to participate in behavioral studies. And I vehemently object to taking any primates at all for any reason out of the wild. But chimps born in captivity probably have few good options. Learning sign language is preferrable to being subjected to medical research. But far better than either would be a reintroduction program to return them to the wild, or life in a primate sanctuary where they would be protected and have all of their physical, social and mental needs met, and be free to exercise their normal behaviors 24 hours a day.

Chimps are smart. They are much smarter than we think they are, and the language programs have gone a long way to show that. For that reason, the language research has been valuable. But it's only valuable if we pay attention to it. We should protect chimps and all other primates from the wildlife trade, from poaching, and from all other human activities that threaten their safety and their future existence. Their survival hangs in the balance as we continue to destroy their remaining habitat and remove animals from nature. I hope we can stop before we've eliminated our only close relatives on this planet.