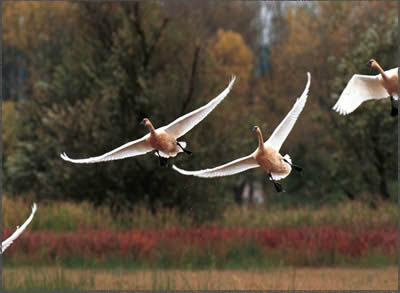 Tundra swans flying in
Unless we stop them, the US Navy will build a jet landing field right beside North Carolina’s famed Pocasin Lakes National Wildlife Refuge. Birds will have to be killed. And pilots will be in danger.

Come to a public hearing and tell the Navy what you think about their proposal. Many other sites for the landing field are available with far less impact on critical wildlife habitat.

If you care about wildlife and wild places, this is an opportunity
to let your voice be heard!!

Background information about the landing field and the refuge:
The United States Navy proposes to place an outlying landing field (OLF) in Washington and Beaufort Counties, NC, farming communities in the northeastern part of the state. The purpose of the landing field is to allow pilots to practice jet aircraft carrier landings. The OLF would see thousands of such landings throughout the year, about one every fifteen minutes by the Navy’s estimate. The Navy plans to acquire 30,000 acres around the airfield. Approximately 1,700 acres of the core area are considered prime farmlands.

The area is less than four miles of a major migratory stop for hundreds of thousands of tundra swans and snow geese. These are big birds. Tundra swans weigh 10 to 20 pounds, have a wingspan of 5 to 6 feet and fly at night as well as during the day.

The 10 squadrons of Super Hornet fighter jets that would use the OLF would be based primarily in Virginia. Only two squadrons would be based at Cherry Point in Carteret County. The communities where the planes are based receive the economic benefit associated with a defense installation, in terms of good jobs and increased tax revenue. There is no net economic benefit to hosting the OLF.

Impact on wildlife:
The OLF would be located just 3.5 miles from the Pocosin Lakes National Wildlife Refuge, one of the most important waterfowl reserves in North America, where more than 100,000 snow geese and tundra swans spend the winter. Northeastern North Carolina provides winter refuge for 65 to 75 percent of the birds that migrate along the Eastern flyway. The acreage the Navy plans to acquire surrounding the landing field provide critical food resources to swans, geese and other waterfowl. Pocosin Lakes also includes populations of black bears and endangered red wolves.

The Navy plans to control the bird population include using dogs, fireworks – and poison. The North Carolina Wildlife Resources Commission has expressed grave concerns about the Navy’s proposal to use a highly toxic pesticide, Avitrol, which is banned for such uses in North Carolina. The Navy also acknowledges it may use firearms to shoot large migratory birds.

Dale Hall, director of the US Fish and Wildlife Service, stated in a February public hearing that “We have a national wildlife refuge whose purpose is to pull birds in. The mission of the outlying landing field would be to push birds away”.

Impact on the pilots:
Experts hired by the Navy have called this the “most dangerous location on the East Coast for a landing field.” The birds fly irregularly, with many flying from feeding grounds to sleeping areas at dusk and dawn. The Navy’s own bird-strike experts have stated that a plane crash due to a bird strike is inevitable at this site.

The solution:
Gov. Mike Easley and his administration have made repeated attempts to work with the Navy to choose a more suitable site. In a statement in February of 2007, Gov. Easley called on Congress to withhold funding for the OLF project until the Navy considers suitable alternatives.

“I believe this matter can be resolved, but spending millions of dollars to build the proposed OLF next to a world-renowned wildlife refuge for migratory birds is not an acceptable resolution. Congress controls the purse strings for this project, and Congress should withhold funding until the Navy is willing to consider reasonable alternatives.”

Local communities and over 100 diverse groups (ranging from Sierra Club and Audubon Society to Ducks Unlimited, the National Rifle Association and the NAACP) have all joined in the fight to get the Navy to choose a more suitable North Carolina site.

What Can You Do in Addition to the Public Hearing

Write or Call your Senator!

Ask North Carolina Senators Dole and Burr to join Governor Easley in calling on Congress to withhold funds for the OLF project until the Navy is willing to work with the state on reasonable alternatives.

Click Here to go the Navy OLF Supplemental Environmental Impact Statement Project site where you can send a comment via online form or US Mail.

"I don't believe the US Congress is going to sit by and let them destroy an entire Atlantic flyway refuge. That would be the most environmentally irresponsible thing that's been done in the history of this state that I can recall." NC Governor Mike Easley

We can turn it around, though. This is one issue that we really can stop, if we speak up - because there is no major industry that stands to gain from allowing the landing field. No lobbyists, no campaign contributors. The usual corporate tools of influence that have their way with most politicians are absent from this scenario. So speak up!! Now's your chance!

Sources: Much of this post was quoted from www.nc.sierraclub.org. Some came from www.fws.gov/pocosinlakes. The half-baked parts are my own.