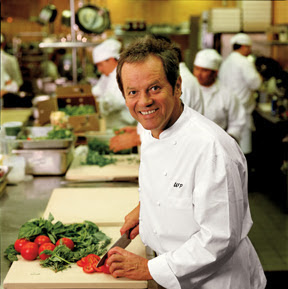 Wolfgang Puck. Photo courtesy of www.bfeedme.com.
World-renowned chef Wolfgang Puck of Los Angeles has announced that he will use eggs and meat only from animals raised under strict humane standards. Humane standards generally mean more earth-friendly methods as well, because humane farms must raise fewer animals to avoid the crowding associated with inhumane factory farms. Fewer animals mean less waste, which is one of the most polluting aspects of factory farming. Humane farming means fewer hormones and antibiotics flowing into our surface waters too.

Chef Puck joins a small but growing group of famous celebrated chefs around the U.S. who refuse to use foie gras, the fattened liver of force-fed ducks and geese. (See my earlier post of August 26 2006, Just What is Foie Gras?? Too Fat to Waddle.) His ban on foie gras is just the beginning. He has also adopted more humane criteria for his eggs, meat and seafood.

Puck has 3 companies that fed more than 10 million people in 2006. Now, his companies can buy eggs only from hens that are not crowded into small cages, as is the industry standard. We visited an egg factory with more than a million hens while we were writing Veggie Revolution. We saw hens crammed into cages so small the birds don't have room to open their wings. The cages are stacked 4 deep so that the feces from each cage rains down on the ones below. See my November 22, 2005 post on this blog, At Least Turkeys Don't Have to Lay Table Eggs for one of the pics from Veggie Rev.

Working with the Humane Society, Puck has also directed his companies to buy veal and pork only from farms where animals are not confined to crates. (Sara Kate and I also toured a factory hog farm, and wrote about the sows we saw confined to crates so small they can't take a single step or even lie down normally. Veggie Revolution has pics and more detailed descriptions.) In the U.S., 80% of hogs are raised on factory farms that use these crates.

Wolfgang Puck has considered seafood too. He vows to use only seafood whose harvest does not endanger the environment or deplete stocks. This is a difficult goal to achieve, unless he is harvesting very small numbers of fish and other sea life, caught with methods other than the long-lines, blast-fishing, and gill nets that have such a high "by-catch" (unintended mortality of untargeted animals). See my earlier post on this topic from September 4 2006, Puffins and Whales Endangered by Fishing Industry.

Some smaller grocery chains such as Whole Foods buy meat and eggs only from producers who use certain humane standards. Whole Foods acquires meats from Niman Ranch, a company whose hog farming methods have been approved by the Animal Welfare Institute. AWI is in the process now of developing humane standards for beef production.

McDonalds claims to have adopted more-humane standards for egg-laying hens. But they did so only under extreme pressure from PETA, and the improvement is only to cram 5 rather than 7 hens into the cages where egg-layers are housed for the duration of their lives. While 5 is better than 7, the living conditions for hens that lay for McDonalds is far short of "humane."

Wolfgang Puck is the best known celebrity chef to make a major public effort to support the humane farming effort. His enterprises include 14 fine-dining restaurants (such as Spago in L.A.) and more than 80 Gourmet Express restaurants.

A well-known personality setting a precedent is extremely valuable to the movement, and will encourage and embolden others to follow suit. We hope.

What can you do?