Dolphins learn tool use from their moms 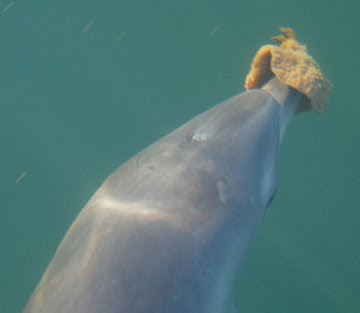 Dolphin with sponge to protect sensitive snoot while foraging

Not too long ago, scientists used to believe that "tool use" was one of the characteristics that set humans apart from all other animals.

We now know that animals do use tools. The list of species observed not only using tools, but making tools, continues to grow.

Bird species also make tools to forage. A warbler species on the Galapagos uses thorns to probe under bark, and scrub jays make and use hooks to retrieve edible items - to name a couple of examples.

Marine biologists have also documented bottlenose dolphins using tools. Scientists say that dolphins in Australia's Shark Bay wear marine sponges on their beaks like a glove, to protect their sensitive beaks when foraging along rugged ocean bottoms. Poking around in deep water carries the risk of stings from bottom dwellers.

(Sponges are animals on the ocean floor whose skeletons are flexible and absorbent.)

The boater who first saw a sponge on a dolphin thought it was a tumor. But the tumor turned out to be a sponge.

But... the sponging doesn't follow any of the patterns that would be expected if it were genetically based.

This is not the first example of what is known as "cultural transmission" of behaviors in animals - behaviors transmitted to other individuals by way of observation or instruction. At least one population of macaque monkeys regularly wash their grains in pools of water, and that behavior is known to be culturally transmitted, for these particular monkeys.

What more will we learn in future years about the traits we share with our animal relatives?

These discoveries are, for me, all the more reason to do whatever we can to stop the environmental degradation that threatens wildlife species worldwide.

See my previous post for three things you can do to slow habitat loss from global warming.