Plan to spend a day in the African village of Welverdiend 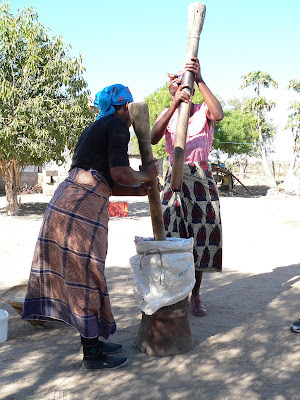 Enery and Saltah grinding mealie-meal from corn in Welverdiend.
The leadwood pestles were almost too heavy for me to lift.

If you are planning a trip to Africa, and want to get a grassroots understanding of the issues rural Africans grapple with, I recommend a tour of the village of Welverdiend in South Africa. We arranged the visit through the Wits Rural Facility of the University of the Witwatersrand. The WRF and the village are adjacent to Kruger National Park, just about 15 km from the Orpen Gate on the park’s west side. The WRF is a university research outpost with accommodations for tourists, scientists, or student groups (high school as well as college, etc.). Wayne Twine was our contact person for the village tour – he is a scientist based at WRF who studies the use of natural resources in 13 rural villages nearby, and supervises student research. Geoffrey Craig-Cooper is the manager of the WRF and books accommodations for visitors; he can also arrange a variety of other educational and recreational outings in the immediate area, including guided wildlife drives within Kruger National Park. Geoffrey can book transportation (ground or air) between the WRF and Johannesburg (or wherever) as well. See the WRF web site for more info about WRF lodging and the nearby outings. (http://web.wits.ac.za/PlacesOfInterest/WRF/Home.htm).

Before we went to Welverdiend, we had visited other African villages that were simply Disney-like recreations of village life 100 years ago, or that gave us canned speeches. But Welverdiend is not a re-creation or dramatization of village life. It is a contemporary, functioning village. We spent the day walking from home to home within the village, on foot like everyone else. We met with the village “headman” and the village medicine man. The women showed us how they grind and sift corn to make mealie-meal, a staple of their diet. They also prepared a delicious feast for our lunch. Most of the delicacies were foods I had never seen before – including mopani caterpillars that were surprisingly tasty! With around 1200 households, the village has schools, a preschool and a women’s guild. The women’s guild and a group of enthusiastic children demonstrated some of their traditional dances, using musical instruments made of the long spiral horns of kudu – a local antelope. I didn’t see any shops other than a tent that some boys had set up to sell haircuts. 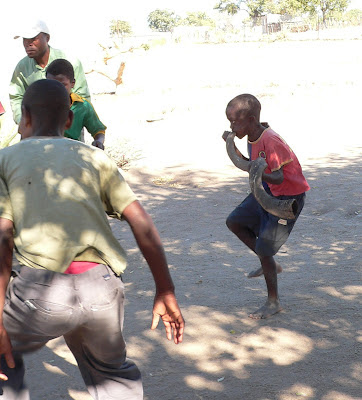 Some of the village men work at lodges within Kruger Park, or for nonprofit organizations, and we found them very well informed about the changes and challenges the village faces. The households rely heavily on natural resources as a source of fuel, food, housing material, fencing, and so on. The residents talked with us very openly about their dwindling supplies of these resources, such as fuel wood, and about their frustrations with elephants that trample their crops, and lions that kill their livestock. They were refreshingly frank about their options in dealing with these issues. The visit had a profound effect on my understanding of world conservation – I can’t overstate the effect it had on me, and I’m not sure I can analyze it. But I do know that eight months ago, my sympathies, my hopes, my anxieties were exclusively focused on wildlife and the coming mass extinctions due to habitat loss and climate change. And still, those worries occupy my mind. But I see now that the issue is much more complex than just saving wildlife.

Successful wildlife conservation plans must give local people economic incentives to participate and support the plans. And more than that - local people want and are entitled to an active voice in mapping out conservation plans as well. If elephants trample their crops, they must be compensated. When villagers call park officials about lions or Cape buffalo in the village, someone should respond. Parks and wildlife preserves should offer training to local people for employment in wildlife tourism - in lodges or preserves or parks - which is happening, but needs to happen faster. When the billions of wildlife-tourism dollars flowing into Africa wind up in the hands of rural villagers near the parks, everyone will benefit: local families, animals, community stability, etc. 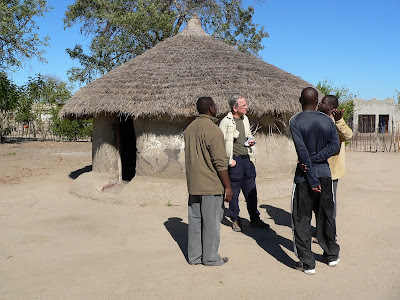 Clifort, Robert and Andres talk to Ken (my husband) about elephants in cropfields

The issues involving resource use and conservation are complex and daunting all over the world, but perhaps especially in Africa – a place with more cultures, more languages, more animals than anywhere else on the planet. I am grateful to the villagers of Welverdiend and to the faculty and staff at WRF for giving us a huge leap in understanding these issues.

Geoffrey Craig-Cooper at wrfmanager@tiscali.co.za to book accommodations at Wits Rural Facility, transportation, and other activities in the WRF area