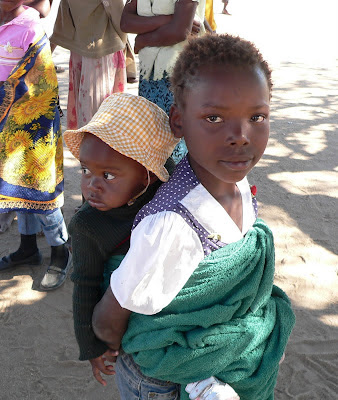 Children of Welverdiend, a South African village just outside of Kruger National Park. Photo by Sally Kneidel
In an August 6 post I briefly described our June visit to the South African village of Welverdiend. We were able to spend a day there talking with the villagers about the challenges of village life in 2007, such as dwindling supplies of fuel wood and damage to their crops from elephants. That was a remarkable day for me - the visit put faces on issues that had just been abstractions to me before.

As I mentioned in the earlier post, the village is only about 15 km outside of the Orpen Gate, one of the main entrances into Kruger National Park on the park's west side. So the village can easily be included in any visit to Kruger. If you're interested in a village tour, contact scientist Wayne Twine of the University of the Witwatersrand (rcrd@global.co.za). The university has a rural research facility on the Orpen Road, just a few km from the village, where anyone can stay.


Wood supplies are shrinking
For centuries, villagers in Welverdiend and other communities have harvested wood sustainably, by cutting only dead branches. But due to increased harvesting by outsiders, often for commercial purposes, dead wood is no longer available. This is a major problem because the villagers use branches to build homes, animal corrals (kraals), fencing, and furniture, as well as fuel for cooking and heating. They depend heavily on natural resources such as wood that historically have been free. But with diminishing supplies, harvesting of wood now often means cutting green branches, which damages trees and is not sustainable. A household kitchen in Welverdiend, South Africa, constructed of branches cut from trees in the village commons. Photo by Sally Kneidel, PhD
American habits cause African resource shortages
The solutions are not easy. In order to conserve their dwindling wood supplies, villagers have resolved to use wood only for fuel. Their goal is to use metal fence posts when building more fences, and to use cement blocks for new home construction. But that's easier said than done. They use river sand to make the blocks, but supplies of river sand are diminishing too. Kruger National Park takes sand from the same site, and the villagers say that less sand is deposited by the river these days. Why? Global climate change. Less rainfall in their area means that less sand is carried and deposited by the river. And who's causing the global climate change? They know who. Americans are responsible for climate change more than any other single country, by far.

In addition to the shortage of sand, villagers have to pay a block-maker to form the blocks, using a special mold. The expense is so high that it may take 10 years to build one home. 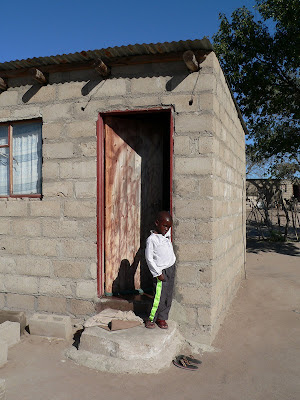 A Welverdiend home of blocks made from river sand and cement.  Photo by Sally Kneidel
Villagers positive and inspiring
But even though their resources are changing as rapidly as the political scene in South Africa, the village is brimming with optimism and positive energy. There's almost no crime in the village, and the residents have formed a cooperative to create job opportunities. Wildlife tourists, many from the United States and Europe, bring millions of dollars into the Kruger area every year, and many of the villagers are being trained at the nearby Wildlife College (supported in part by the World Wildlife Fund) to help them get more involved in tourism at Kruger and at two private wildlife reserves bordering the village. 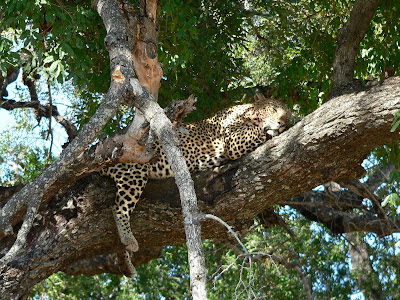 A leopard that we saw near Welverdiend.  Photo by Sally Kneidel
Direct your tourist dollars to those who need it most
If anyone should benefit from the $12 billion Americans spend in Africa each year, it should be indigenous villagers who live intimately with the forests, the land, and the native wildlife. It should not be international hotel chains that take the profits elsewhere. One way to help the villagers of Welverdiend to help themselves is to tour the village, have the same fantastic experience we had, and to tell others about it. If you know anyone - tourists or student groups perhaps - who would be interested in a village tour, please direct them to this blog post or to Wayne Twine, email above, or to me (Sally) at sally.kneidel@gmail.com. I can easily arrange a tour for you. 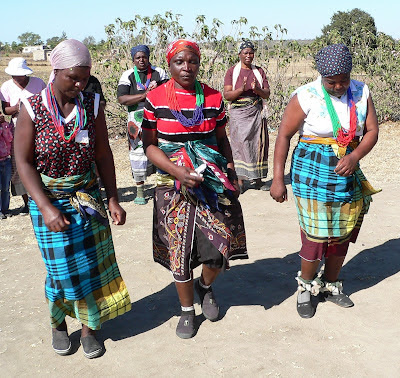 The Women's Guild at Welverdiend demonstrating some of their traditional dances to us.  Photo by Sally Kneidel