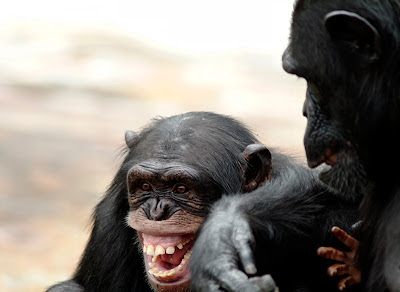 Until recently, we thought only humans could behave altruistically. Not any more. "Altruism" is an act or behavior that benefits the recipient but is of no benefit to the person performing the act. To qualify as true altruism, in zoology, the recipient of the good deed must be unrelated to the performer of the deed.

Humans are constantly doing things that appear to be altruistic - for example, donating time at a soup kitchen or volunteering on a Habitat for Humanity work crew.

But altruism has seldom if ever been documented in animals, except for cases of "reciprocal altruism," such as primates cleaning each other's teeth or grooming each other within a social group.

That has all changed. New research has shown that chimps readily perform altruistic acts not only for other chimps that are unrelated and unknown, but also for humans!

Psychologist Felix Warneken of the Max Planck Institute in Germany conducted three behavioral experiments with adult chimps on an island sanctuary in Uganda. He compared the results with two experiments with 18-month-old German children.

In the chimp experiments, 36 chimps watched one at a time from a barred enclosure while an experimenter unknown to the chimps tried in vain to reach a stick on the other side of the bars. Only the observing chimp could reach the stick.

Most of the chimps grabbed the stick and handed to the experimenter, with no reward.

A similar experiment with 36 children yielded similar results.The second round of experiments involved 18 chimps and 22 youngsters. In this round, the chimps had to climb a 2.5-meter-high platform to reach the stick, while the children had to navigate barriers and hurdles. Most chimps and children still retrieved the stick for the unknown experimenter trying to reach it, with no reward.

The third set of experiments tested the chimps' willingness to help other chimps they did not know and were unrelated to. One chimp watched another in a separate room try to enter a space through a chained door to get food. Only the observing chimp could reach the peg to release the chain. All but one chimp pulled the peg out in numerous trials, allowing the other chimp to reach the snack.

Commented anthropologist William McGrew of Cambridge University, "This comes as no surprise to anyone who has spent lots of time close to wild chimpanzees." 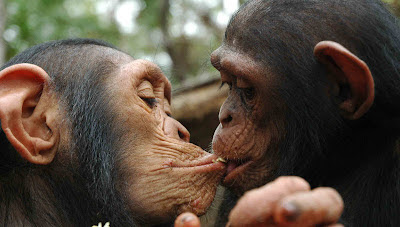 I saw something on the tube a few months back that suggested Chimps are not prone to work together when only one of them will reap a reward.
Your information is more heartening.
Thanks.