Wolves in Danger from the US Government - Once Again 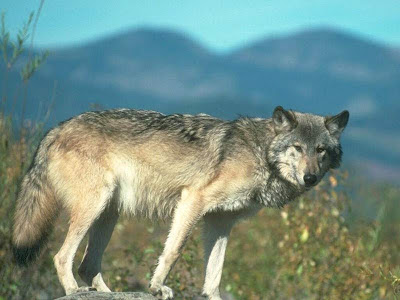 It’s been only 12 years since gray wolves, after years of near-extinction, were reintroduced into Yellowstone National Park. The initial group of 66 wolves were transplanted into the park from Canada beginning in 1995. Now, more than 1,545 wolves roam Idaho, Montana, and Wyoming. Biologists say that a minimum of 2,000 to 3,000 wolves are needed within the area in order to keep them from disappearing again.

The wolves have had tremendous popular support from the beginning. Their reintroduction has been by far the most publicized and celebrated of any wildlife reintroduction in the U.S. The wolves complete the Yellowstone ecosystem, which, without them, had too many hooved animals. The overabundance of some of the wolves' natural prey was altering the natural plant communities along stream banks, due to excessive trampling. With the wolves back on the scene, the Yellowstone natural community is much closer to what it was before most of the surrounding states were profoundly altered by development and livestock ranching.

The success of the growing wolf population has made a lot of money for the park, in sales of wolf paraphernalia, such as wolf T-shirts, sweatshirts, coffee cups, and books from park gift shops. The wolves have also drawn thousands of tourists and wildlife supporters to the area, people who pay to sleep and eat in the park's expensive lodges. My family has been to Yellowstone twice to seek wolf-sightings. We've camped at the Slough Creek primitive campsite, close to the northeastern corner of the park where the wolf dens have often been fairly close to a park road. Every morning in this part of the park, passionate wolf-addicts gather before dawn along the roadsides where certain packs of wolves are most likely to cross in their daily foraging rounds. The hopeful wolf-watchers set up spotting scopes on tripods, and bring out the high powered binoculars and telephoto lenses. Then everyone scans the horizon. Every few minutes a murmur goes up and down the string of watchers "Is that a wolf?" Nope, a coyote. "What's that?" Nah, a fox. "Wait...what's that? Is it? IS IT?"

On our first trip to Yellowstone, we never saw the wolves, due to inexperience about where and how to look. We were so disappointed, even though we enjoyed being there for the hiking and the wilderness and the camping. We saw lots of coyotes, even packs of coyotes, as well as black bears and grizzlies, elk, and pronghorn, and so on....but no wolves.

But on our second trip, we got up at 5:30 every morning and waited for sometimes hours, in the spots where they'd been seen recently. We were rewarded by seeing members of the Slough Creek pack almost every day. We felt lucky to see them eating an elk they'd brought down, although we didn't see them make the kill. 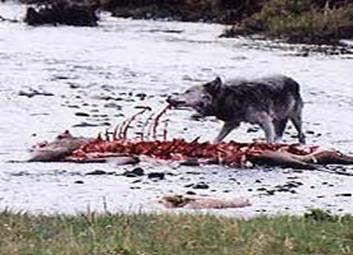 Ranchers and hunters have been opposed to the wolf reintroduction from the beginning. Hunters say the wolves compete with them for native game, particularly elk. Ranchers say the wolves kill their calves. Wolves do occasionally kill calves and sheep. This year they've killed 330 domestic animals. But the U.S. Fish & Wildlife service compensates ranchers for loss of livestock.

The ranchers and hunters apparently are concerned only with their own livelihoods and recreation, respectively. They don't appear to care about wolves, which were here long before we were. Wolves in the U.S. were decimated by an unprecedented extermination campaign in the early 1900s, funded by the U.S. government, which distributed posters encouraging people to shoot wolves on sight, and even offered a bounty for dead wolves. It worked. There were virtually no wolves left in the lower 48, although before Europeans settled North America, wolves were common throughout every region of the continental United States.

Environmental organizations are planning lawsuits to halt the delisting. US Fish & Wildlife has a backup plan that would keep wolves on the endangered species list, but loosen restrictions on when the wolves can be killed, and would allow hunters to kill wolves for going after their natural prey - elk. This provision is to accommodate hunters who hunt elk for recreation.

If you want to help protect wolves, consider supporting Natural Resources Defense Council's campaign to protect them from delisting.