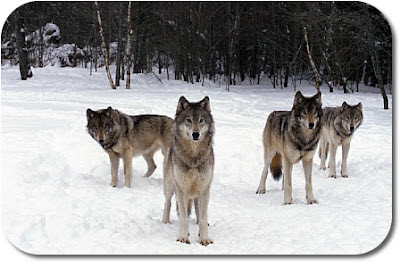 Since I wrote the blog post last night about Yellowstone 's wolves, I have more news. Bad news. This morning I discovered a December 14, 2007 post about Wyoming's Gray Wolf Management Plan, issued by the Wyoming Game and Fish Department. The plan reassigns gray wolves in Wyoming from endangered species to "trophy animals" in some parts of the state (so hunters can shoot them for recreation) and "predators" in the rest of the state so that ranchers can shoot them. According to this plan by Wyoming's Game and Fish Dept, only 15 breeding pairs of gray wolves in the state is deemed an adequate number to maintain the population - about 100 wolves. (There are currently about 1500 in the state; biologists say the minimum number to maintain a healthy population in the state is 2500 to 3000.)

I blanched when I read the post about Wyoming's new wolf management plan, and ran outside to tell Ken. I somehow missed in my first reading of the article that the USFW service this week approved this plan! When I came back in and read it again, I couldn't believe it!

But still, somehow this does not mean that the wolves have been delisted from the list of federally protected endangered species. It only means that USFW approves of the state of Wyoming reclassifying them within the state. This approval by the USFW service is interpreted as a precursor to the USFW's federal delisting of the wolves, though. I believe the feds are still held up by the various lawsuits against delisting, from environmental groups such as the NRDC.

“It clearly shows that politics not science is running this process,” said the the executive director of the Jackson Hole [Wyoming] Conservation Alliance. “It’s too bad that the only recourse that conservation has may very well be a lawsuit.” [scroll down a couple of inches after you click on this link, to see the comments]

I'll be sending a check to the NRDC today.
Posted by Sally Kneidel, PhD at 9:10 AM

I work for a large wildlife conservation organization that donates millions of dollars to habitat and disease research annually. In this instance you are wrong and have been misinformed on the wolf issues. The WGFD are on the right track. Live where wolves decimate the populations of elk, moose, & deer. See the destruction, not for food, but for fun, senseless killing and even just hamstringing. They don't eat everything they kill. Don't believe everything you have read in books and seen on T.V. Come and see it. You will then stop spreading negative propaganda that proves your lack of research & only shows your Blog is purely feelings driven & has nothing to do with fact.

In response to the last (angry) posting... I am laughing at the confusion of whose posting "only shows purely feeling driven, that has nothing to do with facts". You say you have seen Wolf destruction? So what. Get to your supposed facts. Wolf reintroduction is about re-establishing a natural balance. It leaves very little room for the excess elk, moose and deer that our beloved hunters get to cull due to over population.
What exactly do you do for this "Large wildlife conservation organization"? or do you only know that they donate "millions of dollars". If you had a job that even remotely had something to do with Wolf re-introduction you would be informed with facts not emotional and angry. You are more than entitled to your opinion but lets at least agree that it is just that, an opinion.