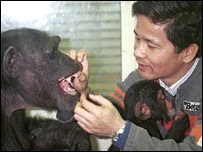 Dr. Matsuzawa with smart chimps Ai and Ai's son Ayuma
I have mixed feelings about keeping chimps in captivity. As I've written about before, chimps in medical or pharmaceutical labs often lead miserable lives.

This new test is a Concentration-like game using numbers on a computer screen.

“We were very surprised to find this,” said Tetsuro Matsuzawa of the Primate Research Institute at Kyoto University. “But it’s a very concrete, simple fact. Young chimps are superior to human adults in a memory task.”

Dr. Matsuzawa and a c0-worker, Sana Inoue, began by training chimps to recognize the numbers 1 through 9 in order. Ai, an adult female who was the first chimp trained, performed as well as adult humans.

But when the researchers tested chimps younger than 6, the primates had a touch screen where scattered numbers appeared for up to two-thirds of a second and were then covered by white squares. After the shortest exposure time, about a fifth of a second, the young chimps had an 80 percent accuracy rate at tapping the numbers in their proper sequence, even though they could no longer see the numbers. This was far superior to adult humans’ accuracy rate of only 40 percent. The findings are described in Current Biology. 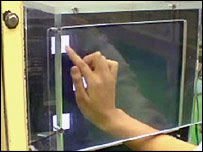 Dr. Matsuzawa said the chimps' ability might be similar to a "photographic memory," which is seen rarely in human children.

But however they do it, it's certain that "young chimpanzees have a better memory than human adults," asserted Dr Matsuzawa. "We are still underestimating the intellectual capability of chimpanzees, our evolutionary neighbors."

Dr. Lisa Parr, who works with chimps at the Yerkes Primate Center at Emory University, described the Kyoto research as "ground-breaking". She said it's importance is unparalleled. "They are our closest living relatives and thus are in a unique position to inform us about our evolutionary heritage," said Dr. Parr.

She concluded that these elaborate short-term memory skills may have been shared by a common ancestor of chimps and humans, but may have lost their importance in humans as we grew increasingly reliant on language-based memory skills. A young chimp, before the numbers are covered (see this video on youtube)

How fast can you count the numbers? Take the test and see.

What's more important to me than learning about our evolutionary connections is learning how valuable these animals are to us right here and now. How can we eat animals that are as intelligent in some ways as we are? Surely this is motivation to protect the world's dwindling populations of chimpanzees more effectively than we are now.

If you want to learn more about protecting populations of wild chimpanzees, see Jane Goodall's website.

Monkeys can estimate numbers as well as Duke students

Chimps and gibbons have human elements to their speech

Wildlife trade, forestry, and the value of activism