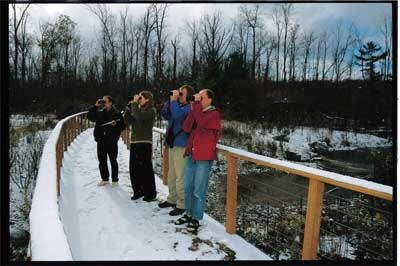 photo courtesy of www.birders.cornell.edu
This year I inherited the job as “compiler” for the Charlotte Christmas bird count. If you’re unaware, the Audubon Society has sponsored annual bird counts for the past 108 years. In Charlotte, we’ve had a count since 1941. My job is to see that the count runs like it has in previous years, and to collect and submit the data we collect to a national database.

I just got a phone call from a staff writer from the Charlotte Observer putting together a piece for tomorrow’s paper. He asked “why do you do this?” It might seem odd – why would 21 people spend all day trying to count all of the birds in a 15 mile wide circle? When people first hear about the count they often express confusion – how can you possibly count every bird in an area that big? How do you avoid counting the same bird twice? The truth is, we never expect to count every bird. What we try to do is get a representative sample. We know what places to focus on to see the birds we suspect are in the circle that day. We avoid overlap by forming 8 groups, each responsible for different sections of the circle.

But that’s more about “how” than “why”. I’ve got three answers to the latter question. Number one for me is the value of the records. Over 100 counts will be carried out in North Carolina alone; thousands internationally. We birders amass a monstrous invaluable data set. Over 30 acres per day have being developed in Mecklenburg County during the past several years. All this development, plus global climate change, are having a significant impact on wildlife – we know so because data sets like the Christmas bird counts show trends.

Another reason is “sport”. For me, what we do feels like a sport. I’m reluctant to admit it, but for me there’s competition. Not so much with other birders – more with myself. Just like a golfer tries to improve every round, I like to see more birds and better birds each year. I’m reluctant to admit this because the perfect effort in doing the count would be to repeat exactly what you did the previous year so the data will be reliable. It’s important to be able to conclude that if you see more birds one year compared to another it’s because a change in bird abundance and not due to fluctuating effort. But it’s hard not to try to do “better” each year, that is, find more birds and especially more rare ones. Last week, for example, while doing a different count, my group was the first to ever see a Common Raven in Mecklenburg County, NC. For me, spotting that raven was like sinking a 150 yard iron shot from the rough on a windy day. It felt great!

Thinking about the bird count as a sport led me to notice that, from the outside, traditional sports seem a little odd too. Don’t take me wrong – I’m an avid sports fan. But hitting a white ball up and down fields with clubs might seem strange to the uninitiated. Or football – 22 grown men “fighting” to get a leather ball to one end of a large field? Maybe counting birds in a 15 mile diameter circle seems strange to some, only because they’re outside looking in. From the inside, it’s sport-like. Twenty-two people working together to achieve a difficult goal that’s challenging and requires lots of skill. Most of us will identify the majority of our birds by sound, and many not by their songs. Sometimes we’ll rely just on simple “call notes” that differ only in sound quality and pitch (we’ll struggle to decide whether we’re hearing “tseeet” or “seeep”).

Reason number three (and as important as the other two) can also be appreciated by sports fans. I’m sure that many who are obsessed with traditional sports enjoy the camaraderie and the atmosphere while watching the sport as well as the action. We 22 birders are also friends; we often bird together throughout the year, and “tailgate” every month at Audubon meetings. And our “atmosphere” tomorrow will be hard to beat. Birding requires walking slowly through natural areas, looking at and listening to everything. As you do this, you become more aware of the differences between seasons, not only in terms of the birds, but also in the vegetation, weather, and sound. The differences between places also become more obvious – field versus forest margin, thicket, or deep woods. You also see that a place of little apparent value to humans can be priceless to wildlife. For example, I’ll look forward tomorrow at seeing Savannah sparrows at an abandoned development along Shopton Rd. To anyone driving by, that lot is a “wasteland” – a “strip of pavement to nowhere”. To the sparrows it’s perfect habitat for the winter – as is the Hilton Hotel in the center of downtown Charlotte for a Peregrine Falcon! We birders know that a Peregrine has been using that hotel as a winter stopover the past few years. It likes to sit on the ‘i” on the red sign high on the side of the building. The skyscrapers of downtown Charlotte offer equivalent habitat to cliffs and open areas out West, and pigeons are good prey. After I saw that falcon, the city’s never felt the same. There’s indescribable joy in seeing a beautiful animal acting according to its nature, oblivious to human activity surrounding it. I’ll see that over and over again tomorrow in many contexts.

So that’s why. For me, I’m excited because I have a big game tomorrow. The weather will be fresh and crisp, spirits will be high. I hope we score at least “80”. I can’t wait.

Data from counts like these across North America go towards Audubon's State of the Birds reports. Hear more about the longest running Citizen Science program in the world and Audubon President John Flicker remarks following this year's count in Central Park http://www.youtube.com/watch?v=qJhZDGRjqgI

Thanks for that information, Polygonia Comma. Thanks for reading. I'll check out the youtube!
:o)
Sally Kneidel