Recovery of endangered fox a model for conservationists 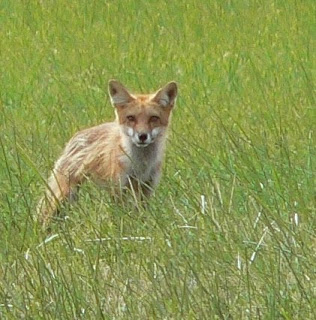 A red fox on San Juan Island. Photo by Sally Kneidel, PhD
Red foxes are common on lots of islands on the west coast of the U.S., many of them introduced. But Santa Cruz Island, near Santa Barbara, CA, has its own native fox species. The "Santa Cruz Island fox" looks very much like a red fox, but is a distinct species. It was added to the endangered species list in 2004, after a decline from 1500 to fewer than 100 individuals.
DDT to blame
Their decline was due to a series of events that started with DDT.  Ocean dumping of DDT wiped out the island's fish-eating bald eagles.  When that happened, golden eagles moved in from the mainland to take advantage of the vacated space and dine on the island's feral pigs.  But the golden eagles ate not only the pigs but the foxes too. The golden eagles hunted the foxes almost to extinction.

Luckily for the foxes, the island is jointly owned by the Nature Conservancy and the National Park Service.  So when the foxes were declared endangered, 10 pairs were captured and bred in captivity.  Meanwhile, the Park Service and Nature Conservancy together relocated the golden eagles and brought in bald eagle chicks.  The feral pigs and sheep, which had overgrazed the island, were removed.

Fox dilemma fixed
Today, the island and foxes are making a speedy recovery.

Says Lotus Vermeer, the Nature Conservancy's project director for Santa Cruz island, "This is the fastest recovery of a listed endangered species in U.S. history that we know of."

Endemic succulents and other native plants are regrowing.  Oak seedlings abound, now that feral pigs no longer eat the acorns. The island has seven pairs of breeding bald eagles. And the foxes are rebounding.  Says Vermeer, "Five years ago, I never saw a fox on the island; a sighting was a rare event. Now you see foxes all the time - you can't help it."

Red fox scratching, on San Juan Island. Photo by Sally Kneidel, PhD
There are plenty of other candidates who could use a successful model of species recovery, such as black-footed ferrets, gray wolves, grizzly bears, prairie dogs, red wolves, Florida panthers, mountain lions, lynxes, badgers - to name a few.  No doubt, the fact that the Park Service and Nature Conservancy jointly own  the island was a major factor in their ability to manipulate animal populations - removing invaders and reintroducing native species. As owners, they also had no complaints from private property owners or commercial outfits to contend with.  I don't know how much money was spent on this project, but with the Park Service involved, it could have been plenty.

Still, a good model is a good model. It provides hope that other ecosystems can be restored to their original state. Nothing like a good success story to thwart objectors.  And where commercial interests are involved, there will always be objectors.

Some of my previous posts about wildlife on the west coast of North America:
Best place in the world to spot Orcas from shore

In search of Northwest birds

We saw one humpback whale: the good and bad on whale-watching

I fell off a cliff while seeking whales, seals, and other marine mammals

Some of my previous posts about wolves:
Gray wolves booted from endangered species list

Wolves in danger from the U.S. government, once again