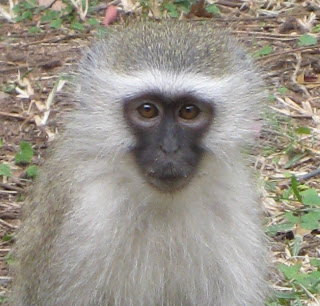 Photo of vervet monkey in Africa by Sally Kneidel, PhD
This post now on Google News and on BasilandSpice

Text and photo by Sally Kneidel, PhD
U.S. is world's leading importer of primates
I learned while researching our book Going Green that the United States is the biggest importer of primates worldwide. According to an American University document, the U.S. imports more than 20,000 primates per year!  The U.S. imports four times more primates than any other single country, and many of those primates are wild-caught.

I was shocked and puzzled to hear it. And not very happy.

The primate trade threatens populations of wild primates
This information is disturbing because more than 130 of the world’s primate species are endangered. Although the leading threats to primate populations are destruction of tropical forests and poor protection of nature reserves, the primate trade and black-market trade are major contributors to the worldwide decline of wild primates and other wildlife.. In tropical countries, wild primates are captured and sold for food, for pets, and increasingly, for use in our research labs.

Turns out the answer is pretty easy. Wild-caught primates cost only a third as much as cage-bred animals. Big savings for a research outfit on a tight budget.

Paul McCartney was right...
So what happens to the 20,000 primates that are imported here each year for medical and pharmaceutical research? When I contemplate that question, I think about Paul McCartney's saying "If slaughterhouses had glass walls, we'd all be vegetarians." Likewise, if research facilities that use animals as subjects had glass walls, we'd all pay attention to those little labels on personal-care products that say "Not tested on animals." And we'd put pressure on medical schools and pharmaceutical companies to use more computer modeling, films, and plastic models for training and testing purposes.

Animals as commodities
Animals in research labs do not, in general, lead happy lives. Many suffer lives of torment and profound discomfort, boredom, or pain, equivalent to the lives of animals raised on factory farms. Research animals and animals on factory farms are regarded as commodities to generate profit for their owners, who are motivated to shave pennies off animal care by skimping on rations, on housing, on cleanliness, space, and medical attention. If you doubt it, check out the footage of Covance, one of the biggest companies to do this work under contract to medical and pharmaceutical companies. Yet...the public knows little about it. How can we care if we don't know?

Two companies make a small step in the right direction
That's why I was mildly excited to learn about a sort-of new approach announced by two North Carolina animal research facilities. North Carolina is the third largest biotech hub in the United States, with more than two dozen animal labs that keep primates, dogs, pigs, mice, and other animals for lab research.  For decades, the location and specific activities of these labs have been guarded secrets, to protect against public outrage, and sabotage by animals-rights groups. But two of those companies, Hamner Institutes for Health Sciences (in Research Triangle Park) and Synecor Labs in Durham, have recently announced a collaboration with the UNC Pharmacy School to form the N.C. Biomedical Innovation Network. (Synecor provides dogs, cats, and pigs to test medical stents and other surgical devices.)  This new collaboration requires the involved organizations to follow "good laboratory practices" that include "proper animal husbandry" says Naina Bhasin, a biologist who heads business and tech development at Hamner. "You want to reduce stress to make sure that the animals are happy and healthy," Bhasin said. Colleen Stack N'diaye, medical director for Synecor Labs, agreed, adding that crowded and dirty conditions skew lab results.

We need transparency
Animal activists are skeptical.  The fact that the two companies announce that they intend to strive for less-stressful conditions says volumes about what's going on right now. Still, their statement is an indication that these companies are feeling the heat from animal-rights activists. Change often starts small. Let's hope the rate of change accelerates rapidly. Because right now, too many animals are suffering for our medical, pharmaceutical, and personal care products, and for the animal products for sale in your local supermarket.  It's not necessary, and as Paul McCartney said, transparency could put an end to the abuse very quickly.

Some of my previous posts about animal testing, the black market in animals, and factory farming:
U.S. labs import thousands of wild primates for research.

The wildlife trade, forestry, and the value of activism

Monkeys and parrots pouring from the jungle

Obama to fight consolidation of farms: good news for small farms and consumers. Biologist Bhasin speaks of "reducing stress" so animals can be "happy and healthy." Less torment is not better than no torment. Bhasin and others who use animals miss the point entirely: that humans do not have a right to use any other species in any manner they want. It's simply morally unethical.

Thanks for your comment, Doc4Animals. I agree with you completely. Sally Kneidel

Generic Viagra said...
This comment has been removed by a blog administrator.
11:18 AM