Why do girls fear snakes and spiders more? Does it start in infancy? 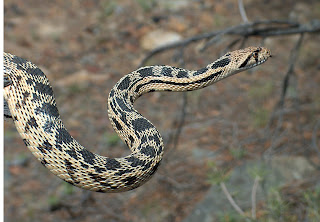 Photo of gopher snake by Alan Kneidel
I love snakes. Every time I take a walk around the neighborhood, I stop and examine every squashed snake carcass I see on the road, of which there are many. I lament the loss of every one of them.

My parents, on the other hand, killed every snake they saw when I was a kid, and called all of them "copperheads."  They were protecting us young'uns, or so they thought. I didn't realize how many people kill all snakes until I spent three years teaching elementary science.  I used to bring a lot of snakes in to show my students. Every single time I did this, a dozen hands would shoot up begging to make a comment.  And almost every single comment was "My daddy killed a snake last week with a shovel" or "My granddaddy chopped a snake in half in the garden."  No one ever said that a snake their family saw was a welcomed or even a tolerated sight. And all of the snakes were allegedly "copperheads." After awhile, I began my snake lessons by banning stories about family members killing snakes; I couldn't take it anymore.  It's a miracle that the U.S. has any remaining snakes at all.

Why are we so afraid of snakes? As a person partial to snakes, I have little patience with it.

Are girls genetically primed to fear snakes?
I read recently an intriguing study about fear of snakes, published in the journal Evolution and Human Behavior. That study is the subject of this post.  Researcher David Rakison of Carnegie Mellon University looked at differences in the way 11-month-old humans react to pictures of snakes and spiders.  Specifically, he looked at differences between male and female children. His findings surprised me.

Rakison showed pairs of images to the youngsters in his study.  First he paired either a happy or a fearful cartoon face with a snake, a spider, a flower, or a mushroom.  After that, Rakison timed how long each baby looked at new pairings of images that were different from the orignial pairings they had viewed. He wanted to see if the new pairings would seem odd to them and would cause them to look longer, out of puzzlement or curiousity. 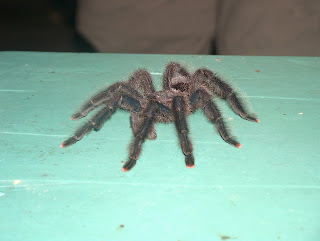 Photo of tarantula in Amazon rainforest by Alan Kneidel
Rakison said that this finding (if confirmed by other studies) indicates that human females have evolved an aversion to snakes and spiders. That trait evolved because women in our evolutionary history were in charge of protecting their children from the bites of snakes or spiders. Another study in Sweden found that snake and spider phobias are four times more common in women than in men. 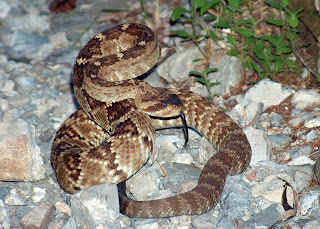 Photo of black-tailed rattlesnake by Alan Kneidel
Not so fast...
says Vanessa LoBue of the University of Virginia. She disagrees with Rakison's findings. If girls gaze longer at the pairing of a snake with a smiling face, it's because 11-month-old girls are better at recognizing facial expressions than male babies, and therefore understand the pairings better. This understanding would account for their surprise and longer gazes.

LoBue offers evidence from her own studies that 5-year-old girls recognize threatening and nonthreatening expressions faster than boys. Do 11-month-old girls have that capacity too? We need to find out! What do you think?

Maybe women are squeamish because of gender stereotypes
I personally don't believe that girls are "primed" genetically to be more fearful of snakes and spiders. I think it's cultural, that little girls learn to act squeamish and fearful by watching older females. I believe women often behave as though they're fearful and vulnerable because that's the sexy female prototype that's been promoted by our Western culture since who knows when. Powerful fearless women are, in popular culture, not widely admired. That's changing slowly. But women are still encouraged (often very subtly) to appear helpless and afraid like Olive-Oyl, while Popeye eats his spinach and beats the tar out of Brutus. I agree with LoBue. Rakison's results can be explained by female children's acuity in reading human facial expressions.

Or maybe girls already been affected by cultural expectations for their gender, at the age of 11-months!

I would love to hear reader comments. 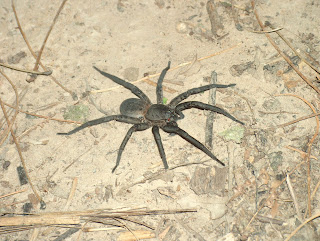 Photo of a hunting spider in Bolivia by Alan Kneidel
Sources:
David Rakison. "Does women's greater fear of snakes and spiders originate in infancy?" Evolution and Human Behavior. Volume 30. November, 2009.

Bruce Bower. "Girls but not boys may be primed for arachnophobia, ophidiophobia: Fear of crawly, slithery things could begin before first birthday. Science News, September 26, 2009.
Posted by Sally Kneidel, PhD at 10:03 AM

The article is very educating!

If I to ask, I have more fear of snakes than spiders! :)

But I fear them both!

It's not that I don't like, I am just taking precautions. Spiders? I play at them when I was still a kid, not afraid, I get tickled every-time they get to my skin.

I am glad, Sally that you question this
presumptuous stereotype. I am an amateur herpetologist and participate alot in outreach educational events utilizing live snakes to teach kids about them. More often than not, it is the young boys that are more reluctant to touch a snake when the offered is put in front of them. This is just my own personal experience and not very scientific. And I can reme ber from when I was avery young girl, I was always picking up insects,spiders, frogs, toads, lizards and snakes I found insitu. I was a fearless little girl. It's a good thing I didn't find any rattlesnakes because I probably would have been bitten trying to pick one up. Now I am 55 and I still love them!

I am a girl & 14 years old and I don't see why girls are afraid of snakes & spiders. I admit when a spider comes out from nowhere, I get a fright but after I can easily pick it up and put it outside. When people usually see my snakes they are afraid at first but after I show them that they will not bite they can easily hold them and not be afraid.

Maybe it is because people have not much knowledge on the snake and assume it is venomous? I think that boys are brought up to look strong and masculine and therefore not being scared of much.

What I don't understand is that if girls are so afraid of snakes and when I ask them why they always say that they don't like the look of them but some of them have bags which are meant to look like snakeskin. I don't think they even know the bag looks like snakeskin.

I love your article.I do have fear to these both creatures. But I more fear on snake.

I totally think that the reason women are scared of creepy crawlies is cultural. The problem is, all of the articles I've read on the subject had to do with studying Western women. We need to study the fear responses of women across the globe. Where are those studies??

If we can show that women in different cultures do not fear insects, then we'll have the answer.