Text and photos by Sally Kneidel, PhD
We visited our son Alan in Puerto Rico in March. He's working there temporarily, collecting data on the island's bird populations for a project based at NC State.

I wrote on April 5 more about Alan's job. I also wrote about the day we spent in historic Old San Juan, with its steep cobblestone streets, old Spanish forts, and occasional interesting critters.

Tearin' outta town to the rainforest
After seeing Old San Juan, we blasted eagerly on to El Yunque Caribbean National Forest,  the crown jewel of Puerto Rico's remaining wild areas. El Yunque is perched high in the mountains of the island's interior, the only tropical forest in the U.S. National Forest system. Almost half of El Yunque's 28,000 acres are still virgin forest, and virgin forests are rare anywhere these days. Puerto Rico used to be completely forested, before Columbus set foot there in 1493.  But, with agriculture, the timber industry, and development, the forests are mostly gone.

Puerto Rico is a relatively small island - only 110 miles E to W; 40 miles N to S.  So El Junque is only an hour or so from San Juan. It could be an even faster trip, but the roads in the mountains are narrow and curvy. 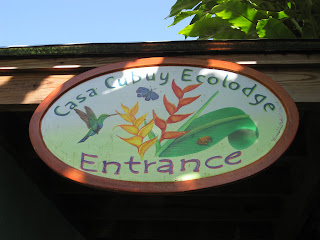 
It was a bit expensive, but we were only there two nights. All 5 of us stayed in one room, to economize.
Ken, Alan, and Matt in our room, below (photo by Sally Kneidel) 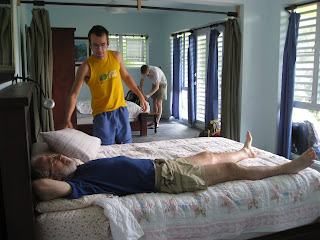 Below: the tropical breakfasts were included in the room cost (photo by Sally Kneidel) 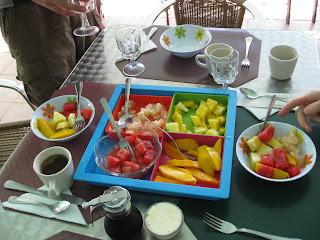 Below, Ken and Alan search for birds from the breakfast balcony. We had a clear shot of Scaly-Naped Pigeons and several raptors flying over the treetops. (Photo by Sally Kneidel) 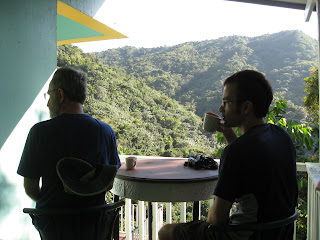 Dinnertime was a blast, on a different balcony (below). We ate traditional Puerto Rican "mofongo" both nights (made vegetarian just for us), drank wine, played pool, acted silly, and listened to the night sounds of the forest critters. Pictured: Alan, Sadie, Matt (Photo by Sally Kneidel) 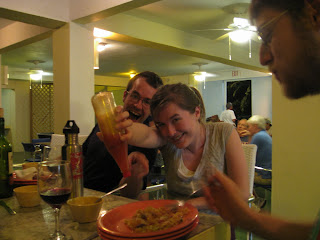 Hiking in the El Yunque
During the day, we hiked in the rainforest. We walked along a narrow curvy road that had been closed by a mudslide several years before (photo below). There was no one else on the road, not one soul. Photo by Sally Kneidel 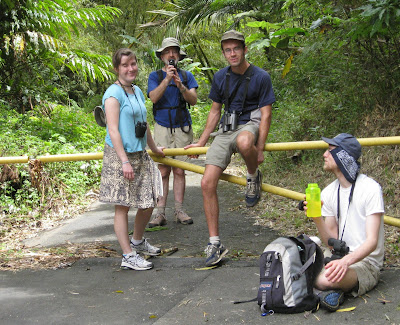 Above, my family: Sadie, Ken, Alan, and Matt (photo by Sally Kneidel). 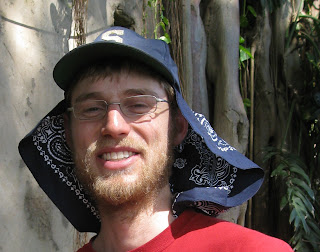 Matt's creative headgear kept bugs and sun off. Mosquitos love Matt, but their affection for him is unrequited.


Tree ferns and flowers
We saw lots of tree ferns, which really are ferns that are tall trees. El Yunque has 240 species of trees, 23 of which are endemic to El Yunque. This forest also has 150 species of ferns and 50 types of wild orchids, I've read. We saw flowers everywhere, many of them familiar species that decorate yards in the States - like  impatiens, which grows wild in El Yunque as a native plant. Bromiliads, Heliconia, and Hibiscus flowers are common tropical flowers in El Yunque too.

Below, the tiny flowers of Heliconia are inside the yellow bracts (photo by Sally Kneidel) 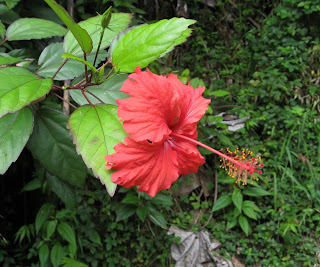 Hibiscus flowers (above) are common there too, an ingredient of familiar herbal teas like Red Zinger (photo by Sally Kneidel) 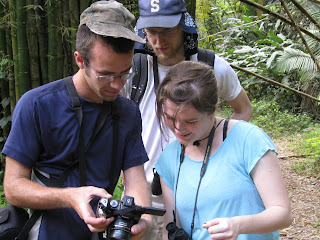 Alan shows Sadie and Matt his pic of the tiny red flower resting on Sadie's thumbnail (photo by Sally Kneidel)
Coquí frogs are the sound of the forest
We heard the  lovely chirping of the coquí frogs constantly, whether inside or out,  with their cricket-like "ko-KEE, ko-KEE". According to the US Forest Service website, "Coquí frogs are plentiful and considered a national treasure in the forest. There are currently 13 species of coquís. These tree frogs are endemic in Puerto Rico." Still, as common as they are, they're hard to spot. Below is the only picture I took of one, and it is, admittedly, pretty bad. 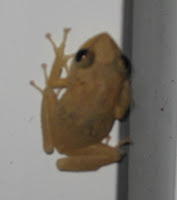 Above, this coquí frog was outside our room at Casa Cubuy Ecolodge in El Yunque Caribbean National Forest (photo by Sally Kneidel) 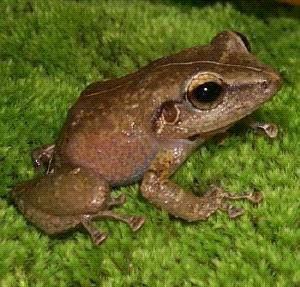 A much better coquí frog photo from the US Forest Service website
Not a lot of mammals...
I've read that bats are the only remaining native mammals in Puerto Rico. We didn't see any bats though. Didn't see any mammals at all except a lot of feral cats and dogs and an introduced mongoose - but not in El Yunque. Mongooses were introduced to control rats (which were also introduced). The mongooses have wrought havoc on wildlife in some areas, but have had no effect on the rats.

The rainforest birds were abundant
We did see a bunch of beautiful birds in El Yunque. Those included the Puerto Rican Woodpecker, the Puerto Rican Tody, the Greater Antillean Oriole, lots of Bananaquits, and the Puerto Rican Emerald (a hummingbird). Seems like a lot of the birds there have names that start with the words "Puerto Rican."
Loved them lizards
The animals we saw most often were lizards, and they were so much fun, like this one on Alan's shoulder (below). They looked like the genus Anolis, but I'm not sure. The lizards were literally everywhere - in buildings, on the road, on every tree. Why are they so common there? Are their natural predators all gone? 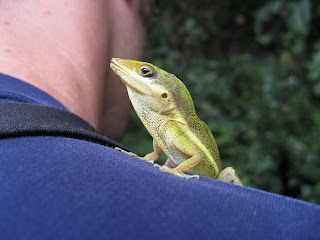 Photos above and below by Sally Kneidel.
Alan and a lizard that's contemplating biting him (below) 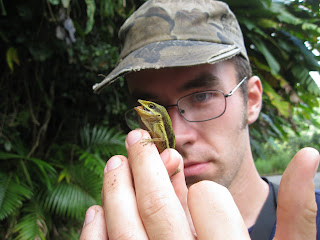 Below, the lizard poses for Alan (photo by Sally Kneidel) 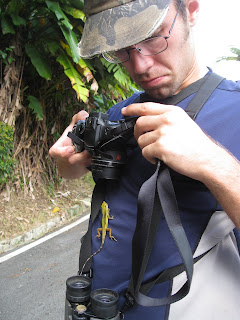 A  lovely assortment of snails
As much as I like the lizards, the snails were really cool too. And abundant.  El Yunque has 34 different species of land snails, some of them startlingly beautiful. 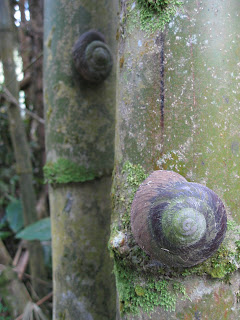 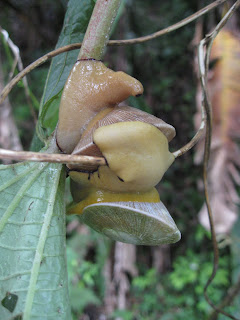 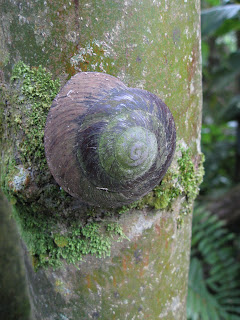 Walking sticks, on shirt and hair
We were lucky to see a walking stick, an herbivorous insect that hides from predators by resembling a twig.
Below, the walking stick on Alan's shirt. Photo by Sally Kneidel. 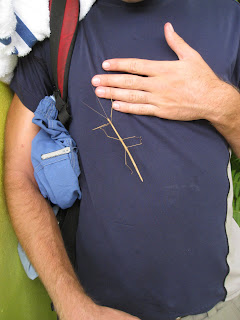 And on my head. (Photo by some Kneidel). 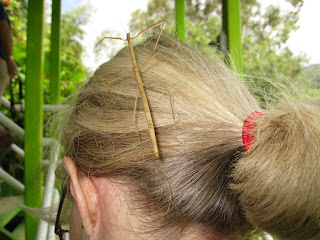 Every stream had its swimming holes
We found a great swimming hole in the river below Casa Cubuy Lodge. We stopped at almost every opportunity for a swim. 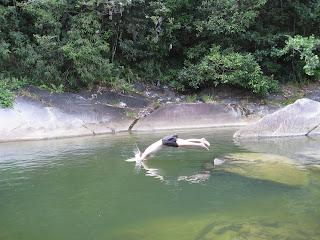 Above, Matt's usually the first one in.
Below, Alan and Ken dry off on the sunny rocks (photos by Sally Kneidel) 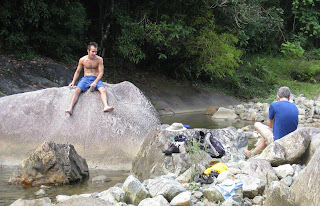 Below, Ken and Sadie at the same swimming hole below our lodge (photo by Sally Kneidel) 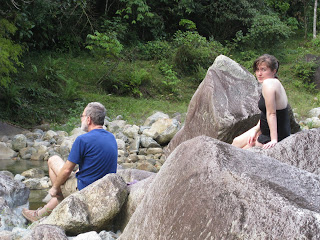 We wondered what we'd find on our next stop
Wish we could've stayed longer in El Yunque. But after only two nights we jammed in our rental car and headed down to the coast for a swim, before climbing back into the mountains - this time to the high peaks of the Cordillera Central.  Descriptions of the beaches and the Cordillera Central to come in my next two posts.
Key words: Puerto Rico El Junque Casa Cubuy Ecolodge
Sources:
Suzanne Van Atten. Puerto Rico. Moon Handbook. September 2009.
Fauna of Puerto Rico. Wikipedia.
Goodbye, me (website of Alan Kneidel)
Posted by Sally Kneidel, PhD at 10:06 AM

Love it! I stayed at Casa Cubuy for one night in January and ate at that same restaurant. My trip to PR was strictly for birding. You can see my full trip report here: http://www.hawkowlsnest.com/2010/02/puerto-rico-day-1-2.html

Thanks for your comment Patrick! We were looking for birds too; my husband and son saw a lot of birds - they're both really serious birders with meticulously-kept life lists. But I didn't get any good pictures of birds in El Yunque, which is why I didn't say much about them in the post. I'll look at your trip report, and send it to my husband and son too. Thanks again for sharing it! :o)

Sally (and Sadie), what a wondrous trip. Jealous here.

The walking stick floored me, so huge compared to those I've seen Stateside.

At first glance, the one on Alan's shirt looks like he's talking on a cellphone (the stick, not Alan...).

Thanks for taking us along! And I know all about my nephew Matt's being first one in the water, he's the brave one...

two healthy teenagers. Make them work! Seriously we have a olunteer program here at the rainforestinn and we get all our work done with kids that stay with us for about three months of room and board. They get to live in the rainforest, see Puerto Rico and often learn some trade skills

I own the rainforestinn which is another bed and breakfast in the El Yunque rainforest. We're very small, only two houses, but we're on the north side so only a 45 minute drive from the airport and just above Luquillo Beach. The experimental station where your son worked is right next door. We have many guests who stay here for birding as there have been more than forty species sighted right from our front porch.

Great pictures. Love to see visitor's pictures on the net. The Islands are wonderful too.