All photos and text by Sally Kneidel, PhD

The variety in Puerto Rico surprised us. We started off in  Old San Juan with its pink buildings, steep and narrow blue-cobblestoned roads, and historic elegance.

We drove from there to our dream destination: El Yunque Caribbean National Forest, which didn't disappoint. We spent a couple of days in the luscious rainforest that was teeming with tropical birds, lizards, coqui frogs, tree ferns, and other delectables. We loved every second. See our pics and read about our stay there in this post.

Yearning for a tropical beach
Then the 5 of us crammed once again into our rental Nissan Altima, and ambled very carefully over the mountain roads toward the southeast coast. Our immediate goal was to find a beach where we could swim. Our ultimate plan was to cover the whole island more or less in just a few days.

As we made our way to the coast in search of a beach, Ken said about the very cramped drive, "This is fun, but could quickly become torture." We tried to divert attention from aching butts and precipitous roadside cliffs by singing loudly along with Sadie's Ipod - amusing songs like "Timber" by Sons of the San Joaquin. Which is actually a good cowboy song, but grows ludicrous as it's played over and over. 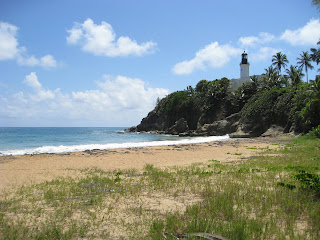 Soon we arrived at Punta Tuna Lighthouse on the s.e. coast, which had a beautiful beach. But swimming was not allowed. 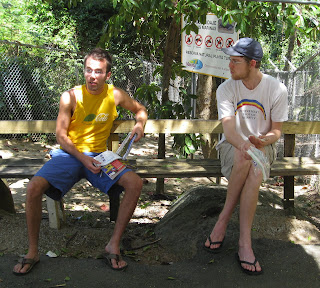 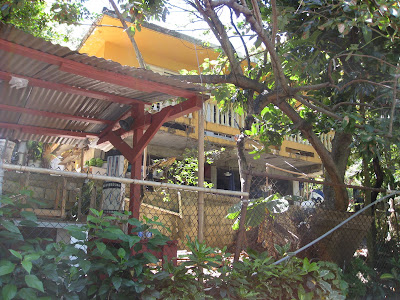 A Puerto Rican home next to our picnic spot at Punta Tuna
We did find the perfect beach...with coconuts
We left the disappointing Punta Tuna and moved on in our quest for a place to swim on the s.e.coast, stopping to check out Playa Lucia, near Yabucoa. It was exactly what we wanted. 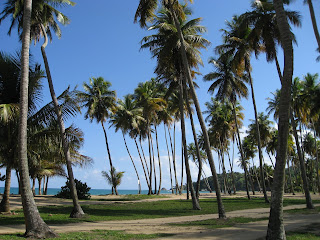 Behind the wide sandy beach, all the trees were coconut trees. 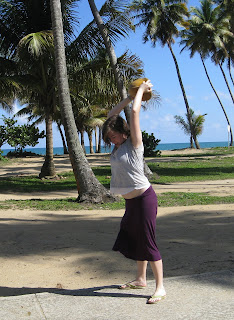 Coconuts were falling from the trees - we had to try to open one. Sadie persistently threw a whole coconut against the sidewalk. Alan went after another one with a knife, then slammed the inner part against the pavement. 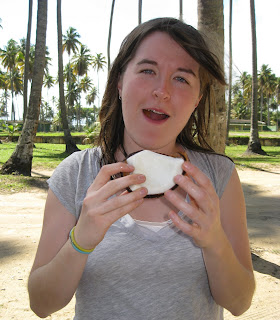 Success!  It was good!
Meanwhile, the sea and the waves beckoned, and so we plunged into the aqua blue ocean of Playa Lucia. 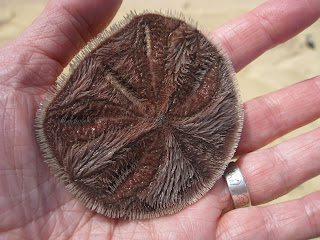 We were surprised to find several living sand dollars in the shallow surf.


Living sand dollars
I've never seen a live sand dollar in the U.S.  These creatures are echinoderms, related to sea stars and sea urchins. The ones you find in beach-novelty stores are just the skeletons of dead ones. [See this piece Alan wrote about shops in the U.S. that sell over-harvested sea animals as "cute" knick-knacks.] The photo above is the underside of a living sand dollar we found, showing the hundreds of little moving spines that they use to either burrow or creep along the ocean floor. We put it back where we found it promptly of course, so as not to injure it.
Seeking Jayuya: forested peaks, indigenous people, rebellious history
After our beach-craving was satisfied, we were ready to head off to Jayuya, a town in the Cordillera Central that Alan had selected. The area has some of the island's highest peaks and an interesting history.  Jayuya is rich in Taino culture, the indigenous group of people who ruled the island when Christopher Columbus arrived. It was also the site of the "Jayuya Uprising," a 1950 revolt against the U.S. government by Puerto Rico's Nationalist Party. During the uprising, the U.S. declared martial law in Puerto Rico, and attacked the town of Jayuya with U.S. bomber planes and artillery. Part of the town was destroyed, although news of the action was kept out of the U.S. media somehow.  Alan's been living in Puerto Rico for several months and had heard that many of the people of Jayuya are still a bit hostile toward the U.S. We were curious. So off we went. See my next post.

Hello! I am puertorrican and I have to tell you that the way you describe your trip is fascinating. I see that you enjoyed your stay but also you found disappointing your visit to Faro Punta Tuna. I think it is a beautiful romantic place. The only thing is that swimming is not allowed, but you can enjoy the view to Vieques, the rocks next to the lighthouse are so unique and the lighthouse as well. I also love that is a long beach with dark sand. I have amazing pictures of that place that I can share with you if you want to post them in your blog. Just let me know how to share it with you.