Happy meal helps kids, says the fast-food box. Is that so? Not according to recent medical studies. Kids who live near a fast-food restaurant are more likely to be obese, according to a 2010 study in the International Journal of Pediatric Obesity. Not surprising, given that most kids' meals marketed by national fast-food chains are high in calories, saturated fat, and sodium. Some contain as much saturated fat as the daily maximum recommended for children. In addition, these meals often fail to meet the nutritional standards for children published this year by the Institute for Medicine.

In a study published this month (August 2010), The Physicians' Committee for Responsible Medicine analyzed the nutritional content of a children's meal from five national fast-food chains: McDonald's, Wendy's, KFC, A&W, and Burger King. PCRM ranked the meals from worst to least bad.

Worst was McDonald's Mighty Kids Meal (double cheeseburger, fries, chocolate milk) with 840 calories and 37 grams of fat. This meal had more than double the recommended limit on saturated fat and sodium for one meal.

Fourth worst was A&W Kids Meal, consisting of a cheeseburger, fries and soft drink, with 780 calories and 9 grams of saturated fat.

And  fifth worst was Burger King's BK Kids, a breakfast muffin sandwich meal with egg and cheese. It had 95 mg of cholesterol and exceeded the recommended sodium limit for a child's breakfast.

Misleading marketing
Kids' meals at fast-food restaurants are marketed directly to children, with brightly-colored boxes and often a small toy inside. They are also marketed to parents, with statements such as this: [the BK Breakfast Kids Meal] "joins the brand's roster of meals that meet stringent nutrition criteria" - although this BK meal exceeds the recommended cholesterol intake for one meal.

Health risks
What are the consequences of too many calories and too much dietary fat?  Obesity, for one thing. According to a study in the Journal of the American Medical Association, 32% of Americans between the ages of 2 and 19 are overweight; 17% are obese. Obesity is associated with a number of health risks, including type 2 diabetes. Another study in JAMA reports that 1/3 of children born in the year 2000 will develop diabetes at some time in their lives. This number is projected to increase as the prevalence of childhood obesity increases. Other health risks of obesity include cardiovascular disease and certain types of cancer (see CDC website).

Another concern with fast-food kids' meals is that many contain red and processed meats, including hot dogs, hamburgers, bacon and deli meats. Consumption of these is a key risk factor for colorectal cancer, according to the American Institute for Cancer Research. Red and processed meats have been linked to other cancers too. As a result of a high intake of saturated fat and cholesterol, one in five teens in the U.S. has an abnormal cholesterol level, a contributor to cardiovascular disease - the leading cause of death in the U.S. 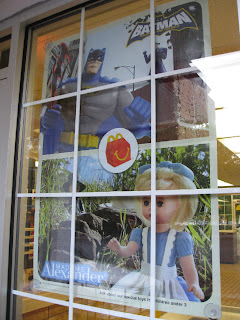 Poster of Batman toy and a doll in the window of McDonald's near my house. Photo by Sally Kneidel

What to do?
Limit your child or teen's trips to fast-food restaurants. Make sure your child is informed about the health risks associated with fast-food. Help kids see the bigger picture, too, and become conscious consumers. Visiting a McDonald's together is a good opportunity to educate your child or teen about the influence of marketing. The one in my neighborhood has posters of toys inside and outside the building, and huge decals of happy messages for kids stuck to table surfaces. The purpose of corporate marketing is to increase sales and make more money for shareholders, not necessarily to impart accurate information to consumers. One likes to think that federal regulations put limits on false or misleading marketing (such as "this product is a healthy choice") but that's not always the case.

Remember Joe Camel?
You might tell your child or teen the story of "Joe Camel," a cartoon figure that apparently was used to market Camel cigarettes to minors. After years of effectively doing just that, R.J. Reynolds ended the "Joe Camel" campaign in 1997, under pressure from the American Medical Association, Congress, various public-interest groups, and a lawsuit. But only after Joe Camel had increased the teenage-sales of Camel cigarettes from $6 million in 1988 to $476 million in 1992.

For more information about corporate goals and ethics, watch the documentary film, "The Corporation." A great family conversation piece.  Help your child be an educated consumer.

Journal of the American Medical Association. "Prevalence of high body mass index in US children and adolescents".

Journal of the American Medical Association. "Lifetime risk for diabetes mellitus in the United States".

Links to some of my previous posts about health effects of meat and environmental impacts of the livestock industry:
Livestock account for 51% of annual worldwide greenhouse gas emissions

Ground beef: a risky choice for families and the planet

And fast food ain't the most enivorenmentally friendly stuff out there ):
Interesting article though.

The argument that links fast food to obesity remain unanswered. Though one reason why people crave to eat more is because of the chemical flavoring (preservatives) that contains in the food. Rapid weight loss cannot be achieve by just avoiding fast food meals but preparing it fresh is better rather than taking an order in a resto.