Text and all photos by Sally Kneidel, PhD. 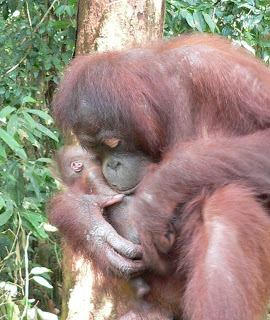 A mother orangutan cradles her baby tenderly, at a forest refuge in Borneo. Photo by Sally Kneidel.

I've wanted to visit Indonesia for years - it has more tropical rain forest than almost any other country. Only Brazil has more. Indonesia is a nation of more than 13,000 islands, including Borneo, Bali, Sumatra, and Java. Although crowded and impoverished, Indonesia is a biodiversity hotspot, home to tigers, sunbears, elephants, rhinos, and best of all, orangutans. The biggest draw for me are the orangutans.

Orangutans were common on Borneo and Sumatra at one time, but their populations are shrinking fast due to massive deforestation. Even in areas where they still survive, orangs are elusive and hard to spot. So when I finally made that trip to southeast Asia a couple of months ago, my hopes of seeing orangutans weren't high.  I had to give it a try, though, before the red-haired apes are all extinct.  I also wanted to understand the challenges to their survival - the forces driving deforestation, and the illegal wildlife trade that's rampant in s.e. Asia.

Poverty and overpopulation are major causes of habitat loss and wildlife poaching in Indonesia - around half the population lives on $2 a day or less. When jobs are scarce, a hungry family can make good money selling timber or trapping wildlife illegally for the pet trade, food, traditional medicines, and research labs. According to Interpol, the trade in wildlife and wildlife parts is the 3rd most lucrative blackmarket in the world, just behind drugs and arms.

I saw plenty of poverty in Indonesia and in Malaysian Borneo (the northern part of the island of Borneo is Malaysia, the southern part is Indonesia). 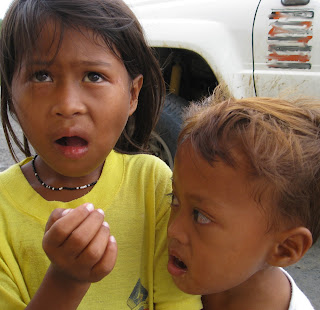 Above, Indonesian children begging for money in the street.  Photo by Sally Kneidel. 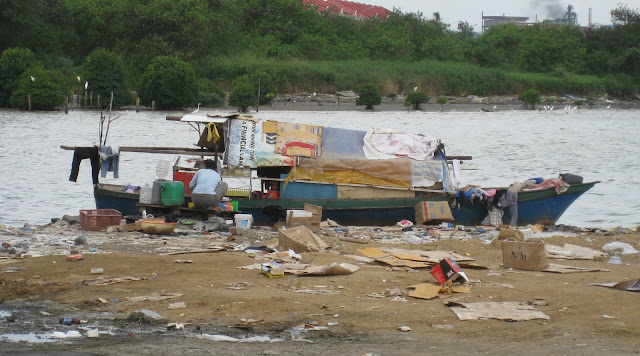 Above, a woman fixing dinner for her children in a coastal town in Borneo. The beached boat is their home. Photo by Sally Kneidel.

Indonesia surprised me
Indonesia surprised me in a lot of ways.  I was stunned at the paucity of wild birds in the jungles of Borneo and Sumatra...until I visited the bird and wildlife markets in Jakarta (the capital of Indonesia). Nearly every town in Indonesia has a wildlife market. A shocking number of species are for sale in these markets, both legally and illegally.  Most of the birds for sale, crowded into small cages often without food or clean water, are wild-caught ordinary songbirds, comparable to bluebirds, robins, or chickadees in the U.S.  They aren't birds like zebra finches and parakeets that will breed in captivity. Most vendors in the wildlife markets have a stall or kiosk, but I saw lots of men without stalls just wandering around the markets with a freshly-trapped bird in a small paper bag, or a monkey in their hands, trying desperately to find a buyer. Trying to get me to buy their captive, so they could buy dinner for their families or pay their rent or whatever. It was heartbreaking. 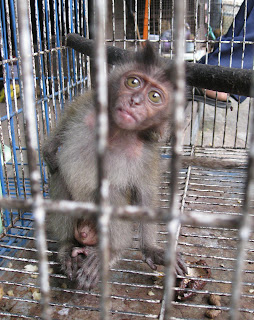 A baby macaque for sale at Barito wildlife market in Jakarta. Photo by Sally Kneidel.

Orangutan conservation is complicated
I was surprised too at the variety of efforts to both protect and make money off of orangutans.  Often those two efforts conflict.  Ecotourism is definitely a good thing, because if communities can make money catering to tourists who want to trek through the jungle or look at wildlife, then the locals have a financial incentive to preserve the forest and wildlife rather than sell the timber and animals or convert the forest to palm-oil plantations. The conflict stems from the fact that tourists want to see orangutans up close, so they can take pictures. But orangutans and other primates don't normally come close to people unless they expect to be fed.  The problem with feeding is that orangutans, being closely related to humans, can and do easily pick up our diseases, and can transmit those diseases to their entire forest population.  I visited the full range of orangutan-viewing opportunities, from totally wild and never fed, to places where some visitors were able to hold orangutans on their laps.

The palm-oil nightmare
Yet another surprise, for me, was the palm-oil industry. I knew that most of Borneo's forests have been converted to palm-oil plantations. But it didn't really sink in until I flew over the forests of Sumatra, Borneo, and Java and saw that at least 70% of the ground below was palm plantations. Those areas don't support wildlife. And the rain forest that remains is in small fragments, most of which are too small to support breeding  populations of any vertebrates other than rodents and lizards. 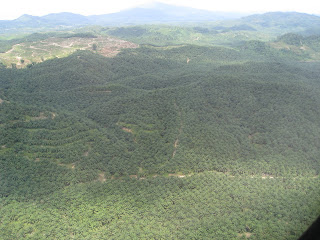 Palm-oil plantations stretch to the horizon, as seen from an airplane over Indonesia. Photo by Sally Kneidel.

An emerging market...is that good?
Indonesia is a big country, almost as broad as the United States. Globally, it ranks 4th in human population, behind China, India, and the U.S.  Not surprisingly, Indonesia has recently been listed as an "emerging market" by Dow Jones and various other financial institutions. Other "emerging markets" include India, China,  Malaysia, Brazil, Peru, South Korea, South Africa, and many others. The fact that Indonesia has been categorized as an emerging market means that it will be attracting even more international investors.  That could be a good thing. But in the case of Indonesia, I imagine it means more extraction industries - international corporations that harvest/destroy the country's national resources and send the profits to international shareholders.  I fear it means that even more of the country's forests will be converted to the lucrative palm-oil plantations.  That scares me to death.  A large number of "charismatic megafauna" species will inch even closer to extinction - the orangs and various other primates, the elephants, rhinos, tigers, sunbears, etc. 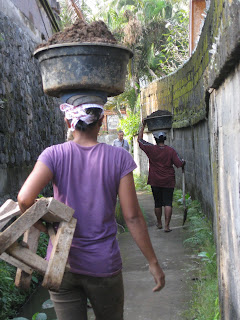 Women on the island of Bali, Indonesia, carried back-breaking loads of soil to a construction site for 12 hours a day. Photo by Sally Kneidel.

What's the solution?
In several posts to follow, I'll explore these issues in more detail. I'll tell you everywhere I stayed on my trip, with contact info, and all the orangutan sanctuaries and forests I visited. I'll show you my clandestine pics of the wildlife markets of Jakarta, pics of wild orangs and other primates, as well as the landscapes, the cities, and the beautiful people of Indonesia. And I'll tell you what I learned about orangutan conservation - what's working, what isn't, and what you can do (from home, or as a visitor to Indonesia). I'll review the conservation organizations I learned more about, such as ProFauna Indonesia, BOS (Borneo Orangutan Survival), Traffic, and (SOS) Sumatran Orangutan Society. What does it mean to live on $2 a day? The issues are complex. The future seems challenging for Indonesia's people and daunting for their tropical forests and wildlife....but not hopeless.