Tiny new frog discovered on Borneo - can it survive deforestation and the illegal wildlife trade? 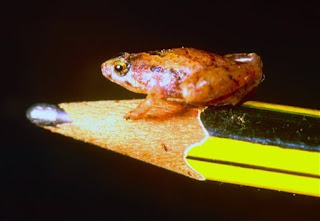 Photo by scientist Indraneil Das of newly-discovered frog species
A new pea-sized frog species has been discovered on Borneo!  Scientists from the University of Malaysia Sarawak found the tiny frogs living in and around tubular carnivorous plants called pitcher plants. The tadpoles grow in the water inside the plants. Although the water contains enzymes that kill and digest insects, the frogs and tadpoles are not harmed.

Frogs discovered by odd call
The scientists happened upon the frogs in plants near a road, in the mountains if Kubah National Park in the Malaysian state of Sarawak (on the island of Borneo). Because the frogs are so small (a half inch or less), the workers located them not by sight, but by the strange call coming from the carnivorous plants. They described the call as "harsh rasping notes." The species has been named Microhyla nepenthicola, after the pitcher plant where they were found. 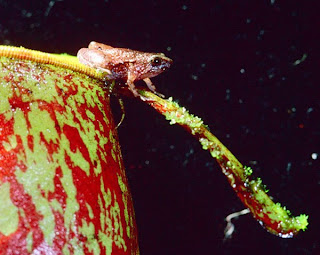 Borneo's wildlife threatened by habitat loss and illegal pet trade
Borneo is a tropical Southeast Asian island, one of the world's richest biodiversity hotspots, so it's not surprising that a new species would be discovered there.  Unfortunately, Borneo is rapidly being deforested and converted to palm-oil plantations; as a result, many of its fauna and flora are threatened or endangered by habitat loss. 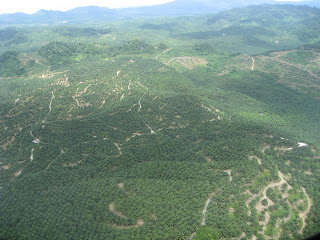 Once forested land in Borneo, now covered with palm-oil plantations. Photo by Sally Kneidel
In addition, illegal trade in wildlife is rampant in Southeast Asia . Animals are traded for pets, for traditional medicines, zoos, wildlife collections, biomedical research, and so on. Although laws are in place to protect rare and threatened wildlife, enforcement is lax and trade flourishes with little restriction, even the sale of critically endangered orangutans. Rare species command a higher price in the wildlife markets, and so are targeted by trappers. This fact is not good news for the new frog species.

New frog's location may offer them some protection
In spite of these threats, a couple of factors may help Microhyla nepenthicola survive. One is their location.  The frogs were found on a mountain, and forests on slopes are more difficult to harvest. Also, they were in a national park, which will offer some protection from deforestation, although illegal harvesting of trees, plants and animals continues in Borneo's national parks because wildlife protection laws are not enforced.  However, the clear-cutting required to establish a palm-oil plantation is unlikely to occur in a national park.

In addition, the frogs may be dependent upon the pitcher plant and unable to survive elsewhere - especially in the wildlife markets, where conditions are dirty, and care provided to animals is minimal. 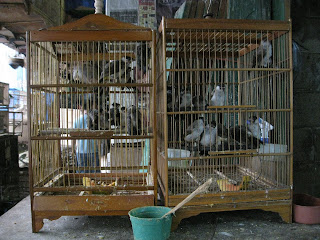 Birds at Pramuka, a major Indonesian wildlife market in Jakarta. Photo by Sally Kneidel
In the four wildlife markets I visited in Indonesia and Singapore, I did not see a single amphibian. They may be there, but I didn't see them.

We'll see what happens down the road for M. nepenthicola.  I wish them good luck.

For more information about wildlife on the islands of Borneo and Sumatra, read my three previous posts about my visits there, and see the links to websites and publications below.

My previous posts about the wildlife of Borneo, Indonesia, and Malaysia:

My search for a wild orangutan in Borneo and Sumatra August 16, 2010

Publications with more information on wildlife conservation in Indonesia and Malaysia (including Borneo and Sumatra):

Chris R. Shepherd. 2010. Illegal primate trade in Indonesa exemplified by surveys carried out over a decade in North Sumatra. www.traffic.org

Vincent Nijman. 2009. An Assessment of Trade in Gibbons and Orang-utans in Sumatra, Indonesia. A TRAFFIC Southeast Asia report.

Vincent Nijman. 2005a. Hanging in the Balance: An Assessment of Trade in Orang-utans and Gibbons
on Kalimantan, Indonesia. A TRAFFIC Southeast Asia report.

Vincent Nijman. June 2005b. In Full Swing: An Assessment of Trade in Orangutans and Gibbons on Java and Bali. A TRAFFIC Southeast Asia report.

Serge A. Wich et al. 2008. Distribution and conservation status of the orang-utan (Pongo spp.) on Borneo and Sumatra: how many remain? Fauna and Flora International. Oryx 42(3):329-339.