THE FASHION MULLET, OR SARA KATE WITH INCH-LONG HAIR 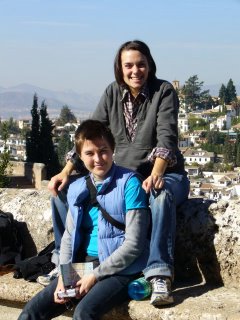 I bought a new hat last night, and with it came a jaunty sense of adventure. It is a very European hat. I could be Maria Luz, a Spanish anarchist, or Lujka, a Polish university student, or Sara Kate, an American weirdo. Who knows! We have all been immensely enjoying the amount we blend in here. In contrast to , when I speak Spanish here, no one does a double take. Well, sometimes they ask me if I'm from . But usually they just accept that I am both white and bilingual. I can't describe what an immense relief it is not to feel like a freak all the time. I can walk around in the streets without feeling hunted.

Our haircuts help. The European Fashion Mullet is rampant here: I have not seen so many mullets since the Wal-Mart on Eastway. It is the new hip thing here, to have a massive mullet and bangs. Fortunately, Nicci got a haircut before we left with bangs and a shaggy part in the back... it is just weird enough to pass as a pseudo-mullet. And since my hair now stands straight up, I look just weird enough to fit in as well. Yesterday the two of us were walking around and people actually asked US directions - twice! And one time we actually knew. I've never felt better about my Spanish abilities or my ability to fit in in a foreign culture.

We're taking a break from farming this week. Our last few days on the farm we actually got a paying job working on a construction site, believe it or not. Rory and James were working with a construction team to restore a crumbling farmhouse so its owners could apply for a certain permit by a certain date, and had only 10 days to finish. So we got paid 25 Euros a day each to whitewash our brains out, but also to have the unique experience of being women on an all-male construction crew. It's really changed my perspective on manual labor. When I pass people doing construction work now, I notice what they're doing and whether I could do it and what it would be like to do it. It's hard to accept that some of it I really couldn't do, physically. But a lot of it I can, and it's powerful to feel that capable.

It was also interesting that all of us workers spoke English, being from , and our supervisor spoke Spanish and had to use a translator to give us directions. It was a confusing inversion of most construction sites in the , for sure!

Since then, we've been on the go. Our last night with on the farm we spent in the tiny nearby hil town where Rory and Felix live during the week, home to 800 people. We wanted to buy them a thank-you for being so kind to us, and decided on a nice bottle of wine. So we set out, asking directions to "," which turned out to be 3 stores. One of these sold wine. So we chose the nicest bottle they had, and also 3 loaves of bread and 6 eggs. The women toted this up and said, "That'll be 3.10." "Plus the bottle of wine?" I asked, confused. "No, no, with everything!" she beamed. Befuddled, we paid, and stumbled out in the street and examined our purchase. According to the receipt, the bottle of wine had cost 80 cents. Uhh.. what? We decided it must have been a bottle of cooking wine. So we went across the street and tried again. This one cost 3 Euros. The woman explained to us that that's the most any wine costs here. They produce so much wine that it's as cheap as water. So, our fine thank you gift turned out to be cheaper than a bottle of soda. Great. Oh well, Rory thought it was funny anyway.

Since then, we've been in and Sevilla, having a taste of the cosmopolitan life. And when I say cosmopolitan, what I mean is that our "hotel" is actually an extra room off the courtyard of someone's house. The senora is very accomodating to us, but likes to tell her husband what to do. "Could we have an extra blanket?" I asked. "Pepe!" she barked. "Pepe, get them an extra blanket. A big blanket!" Pepe got us two.

This afternoon we're going to go to either a 10th century Muslim palace, or an art museum. Or we might just wander around in the labyrinth of tiny streets and alleyways until we're totally lost and bewildered, and then sit in our hotel room and eat beets and olive oil in bed. That's what we did yesterday.