PIGS IN THE WOODS 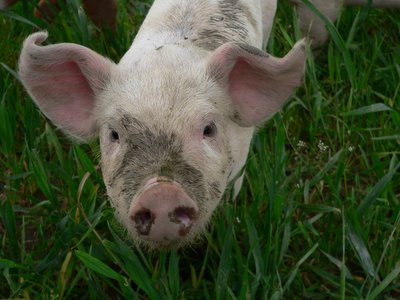 Sara Kate and I went to interview the other day another farm family, one that raises a few hogs "in the woods." This was not for Veggie Revolution, which came out in October, but for our new book in-progress about how American's spending choices have more influence than our votes. Because our consumer dollars empower the corporations that increasingly shape our world and the future of our planet. For example, Tyson chicken factories and Smithfield hog factories are flourishing because many Americans are buying their products by the gazillion. And Wal-Mart, as we now all know, pays its sweatshop workers (women and children) less than 20 cents an hour, because many of us love those low, low prices. Hard to resist. And so on, you get the picture.

Anyway, we went for the interview, and the farmer dad and the teenaged son led us out into the woods, for real, to find the hogs. There they were, all stretched out, snoozing in the underbrush. We talked for a while, then left. I accidently left my bookbag there, so I had to go back later to get it. While no one was home. This gave me a chance to creep back out in the woods to try to get some close up pictures of the hogs, unencumbered by spectators. I got real close and sat there for a while until the hogs ignored me. I just watched their behavior. I was thinking about the hogs we wrote about in Veggie Revolution, on the factory farm for Greenwood Meatpacking Company (think Gwaltney and Jimmy Dean sausage). Those Greenwood hogs were in metal stalls with wire mesh floors, unable to take a single step forward or backward or sideways. Unable to lie down normally. Nothing to do for amusement day in or out. Sitting in their own crap, breathing fumes that give most of them pneumonia before slaughter.

But the hogs in the woods, they had it easy, as hogs go. They had chosen to lie in the loose dirt under tangled vines. They seemed to like having the vines lie across their skin. They liked the underbrush. The dirt was loose because they had made it so. One of them spent 10 minutes, as he lay on his side, poking his snout into the loose dirt and tossing it up so that it fell across his face. He wanted the dirt to lie scattered across his skin. He was very particular about it. When he finally had the vines and the scattering of dirt just so, he fell asleep.

And yet, the county extension agent I interviewed in Veggie Revolution told me "If you give a hog a safe place to sit [in a cramped metal stall] and enough food to eat, she's just as happy as can be." It's scary that the government officials in charge of animal comfort are so oblivious and indifferent to reality. The meat industry is big business for the state. And that's the bottom line. If for some reason caging all dogs and cats in tiny metal stalls became a profitable thing to do, then it would suddenly become legal to do so. Farmed animals are currently exempt from the animal protection laws that apply to all other animals - pets, zoo animals, circus animals, wildlife, etc. Because applying protection laws to those farmed animals could put a dent in the huge profits generated by the meat industry, some of which wind up in the state's coffers. And the meat industry is a big source of jobs for unskilled laborers in many states, certainly in NC.

What can be done? As a society, eat less meat. Pull the plug on Tyson and Smithfield and ConAgra and all the rest of them.
Posted by Sally Kneidel, PhD at 11:31 AM

What an excellent blog! I'm so happy I found you. Yeah, besides loving animals I'm a vegan to give the finger to corporate agribusiness. You'd think that more progressives/liberals would do the same. They think the government lies about the war and other situations, but they believe the USDA. The USDA and the FDA are in bed with the 128 billion meat industry. Humans are being sold out and the karmic implications are astounding!

yep. "pull the plug" in any little way we can. and on the related topic of environmental fallout from factory farming, Purdue et al, should be held liable for their immeasurable damage to the Chesapeake Bay (just for one example). i won't be holding my breath, though.

Hi peaceofmeat and platypotamus, glad you came by. I agree peaceofmeat - it surprises me too that people who are really knowledgeable about a lot of government and industry screw-ups are sort of in the dark about the meat industry. Someone's done a great job of perpetrating a major snow job.

Platypotamus, I didn't know about Purdue and the Chesapeake, thanks for that tip. I'm gonna google and read about it.
Catch you later
Sally K.