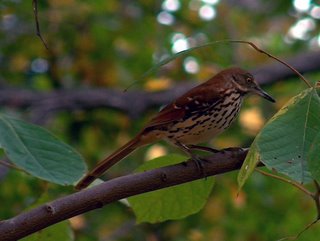 
There's a good post this morning on VeganFreaks about pets and hunters roaming in the woods. Along those lines, take a look at these links:

Well-fed and healthy dogs and cats can really do a number on wildlife. Especially cats. Cats kill millions of songbirds every year. I think housecats are the first or second leading killer of songbirds (after habitat loss). The other leading killers of songbirds are collisions with glass windows and radio towers.

Last year in my hometown there was a stir in the media about roaming housecats killing wildlife. Our misguided mayor’s official position was “that’s nature. Let nature do its thing.”

The thing is, that’s not nature. House cats and dogs are not native animals, are not part of ecosystems,and they’re not controlled by the factors that keep animal populations in balance in natural ecosystems.
Posted by Sally Kneidel, PhD at 12:34 PM