Corn is one of those all around workhorse crops, which we are able to grow successfully under a variety of circumstances over a wide range of terrain and climate. It can be popped, boiled, barbecued and turned into flour, deep fried used as fodder and decorated for Halloween so it is little wonder that so much hope has been pinned on the future of this super cob turned ethanol as answer to the current energy crisis. 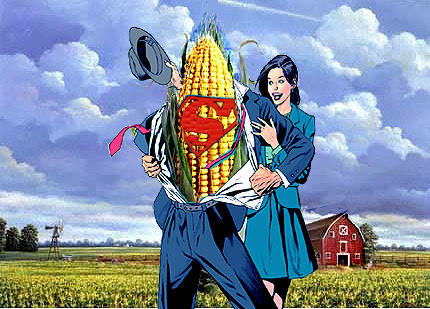 Ethanol is the main component of E85, which is 85 percent ethanol and 15 percent gasoline and the E85 revolution has begun according to a recent story by the New York Times in which they report that as many as 39 ethanol production plants will be built in the coming year. Ethanol plants powered by corn have the folks who trade in commodities all "fired up" by the prospect for the future of their 'futures' as well as ours. The farming industry, in particular mid-western farm states like Minnesota, Iowa and Nebraska, are ready to declare an economic boom comparable to the heady days of the space program in the 60s. And everywhere consumers are ready to believe in the holy grail of salvation through corn - what could be more American?

And so we blithely head off to the showroom to seek out the newest and most cunning hybrid flex fuel guzzlers on the market and raise the standard for imports already promising 30, 40 60 miles per gallon and still the petroboomers are pushing for increases in off-shore drilling while Congress enacts huge tax incentives for ethanol production and continues to increase subsides for ethanol research and no one's gettin' fat 'cept mamma gas.

Turns out ethanol, while a great concept on paper, is not the fountain of truth for the oil industry. In fact, most researchers have for some time understood that producing ethanol from corn produces more emissions from the oil required to fuel the process than it saves in the end. Oil and gas are the fuel needed to grow, cook and transport the ethanol and there in lies the paradox, corn is simply not the best raw material from which to produce biofuel alternatives, sugarcane would be far better - it has more sugar content. Alas, sugar is also more expensive due to artificially high prices designed to protect a few domestic growers from foreign competition.

And so the debate rages as more Americans, some 2 million of us, drive our shiny new flex fuel cars, fueled by standard gasoline, while some corn producers worry that shifting so much of their crop to ethanol production will have a detrimental impact on the nation's food supply.

We are not likely to hear much from congress either. Facing mid-term elections members are not likely to vote against any part of the $2-billion in subsidies granted to giant agri-conglomerates like Archer Daniels Midland whose share last year fueled a 100 percent increase in their stock price.

Still, ethanol from some source, no doubt will be a significant part of the alternative energy that ultimately weans our economy off mamma gas. For now it is important only that Congress must attempt to spend our tax dollars on a variety of alternatives and not sinply rely so heavily on the corn solution.

:: 6/23/06 - A Greener media video discussion about corn ethanol and its market potential in the production of E85.
Posted by For Paws Hospice at 10:39 PM

there are so many problems associated with relying on corn to fix the oil crisis, one of which is the multitude of corn and thus land mass that would be required to sustain our dependency. the need would spur world hunger and political instability. corn is not a feasible option for fueling the next generation, but rather, just a diversion from the development of more viable options.