Women are gaining influence as leaders throughout the world, fighting for peace, justice, the environment and civil society.

Listen to the program here 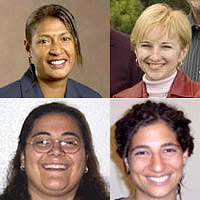 On this edition, we profile four courageous young ecology activists, going to court for environmental justice and leading regional cooperation to rescue precious natural resources and indigenous cultures. Anne Kajir is an indigenous lawyer fighting for the rainforest and the people of Papua New Guinea. Olya Melen is a Ukrainian lawyer who stopped her government from destroying the Danube Delta. Dana Rassas is a Palestinian activist on trans-boundary water policy issues in the Middle East. Ilana Meallam is an Israeli advocate for the indigenous Bedouin people of the Middle East.