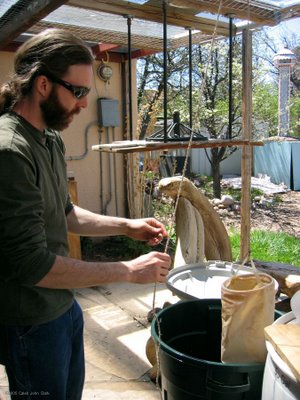 Vegetable oil and biodiesel are the most popular biofuels among the local folks in my neck of the woods. But vegetable oil and biodiesel (both for diesel engines only) are not on the front burner for either government officials or the media right now. No, the currents news is all about corn ethanol - both Detroit and the federal government are pushing it as the savior fuel. The production of corn ethanol (for gasoline engines) is surging. Archer Daniels Midland, one of the biggest corporations genetically modifying our crops, is also the biggest manufacturer of corn ethanol.

But who’s using ethanol? No one I know, except for the standard 5% in all gasoline to make it burn better. Corn ethanol reminds me of the faddish education philosophies that used to ripple through the school system during my teaching days. Some new idea, like “cooperative grouping,” would come along, and the school system would latch on like that was the solution to all of our instructional difficulties. All the teachers would be sent to workshops to learn the new methodology and software. Then a couple of years later, some other new bandwagon would come along, and “cooperative grouping” would be forgotten.

Corn ethanol is the energy bandwagon of the moment. Just a year ago, when Sara Kate and I began researching our new book, everyone was all excited about the promise of fuel-cell cars. Now, fuel-cells are passé. They’re not going to work and everybody seems to know it. They cost too much, and the production of their fuel uses too much energy.

Detroit in Trouble over Slumping SUV Sales
Even George Bush, the oil industry's best friend, is promoting corn ethanol. Why? Because Detroit is in trouble, and the automakers, as well as Bush, see corn ethanol as a potential savior. Sales of Detroit’s cash cows – the SUVs and pickup trucks – are slumping as gas prices rise. Consumers are seeking better fuel economy, but Detroit can’t compete with Japanese automakers for hybrid business. The Japanese hybrids have too big of a headstart – their factories are all laid out for hybrid technology, no retooling required. And Toyota’s Prius hybrid has been around for a decade now, long enough to have all the kinks worked out. The Japanese Prius is the gold standard for hybrids - it is by far the most popular hybrid.

So Ford has announced plans to focus on “flex-fuel” cars, which can burn a gasoline blend that’s up to 85% ethanol. No competition from Asian automakers. And Bush is supporting the development of corn ethanol as a gasoline supplement – to help Detroit automakers with their “flex fuel” dreams. To meet the clamor from consumers for fuel efficiency. To promote car sales. To keep GM and Ford from declaring bankruptcy.

Bush’s promotion of corn ethanol has little or nothing to do with tailpipe emissions and global warming. It’s about the automakers’ financial insolvency, and the economic dangers of their potential downfall.

Oil Profits Break Records
You might wonder, as I did, how George and Dick’s beloved and coddled oil industry might feel about the promotion of ethanol as a displacement for gasoline. Oil and gas companies go to great lengths to keep Americans addicted and slurping ever more gas and diesel. Between 1998 and 2004, the oil industry spent more than $420 million on politicians, political parties and lobbyists in order to protect its interests in Washington, according to a report by the Center for Public Integrity. So oil companies are not too happy about the idea of corn ethanol. But not to worry. ExxonMobil reported $36 billion in profits in 2005, a record for an American company of any kind. George apparently feels he can afford to divert some of his attention to baby number two, Detroit, who is sick at the moment.

Fatal Flaws for Corn Ethanol
And yet, how can corn ethanol possibly be the solution for automakers in crisis? At least 3 major obstacles stand in the way, some of which were outlined in more detail in our July 8 post.

2) Corn ethanol requires more energy to produce than it yields, for a net energy loss, according to Cornell scientist David Pimentel and many others. (This particular point is irrelevant for our eco-indifferent president.)

3) Corn ethanol requires more land than we have to spare for it, given that corn is our nation’s biggest crop and 56% of it goes to livestock already.

Corn ethanol is going to fizz out, probably sooner rather than later. Just like the fuel-cell idea did. (Cellulosic ethanol is another matter – as we wrote about in the July 8 post. We don’t yet have the technology to make cellulosic ethanol commercially viable, but probably will in coming years. And that could be a major part of a widespread solution to our gas dependency. I hope that it is.)

Question Authority
Meanwhile, do-it-yourselfers and entrepreneurs in my area are turning to waste vegetable oil as a fuel source. They’re the kind of folks who might have a “Question Authority” button on a bookbag - mavericks and free spirits, independent and frugal types. Some are forming coops to convert waste vegetable oil to biodiesel. Others are buying conversion kits to install in their diesel cars, so they can fill their tanks with straight vegetable oil.

I would like to get a diesel car. If I actually do, and I get a conversion kit to allow me to use straight vegetable oil as a fuel, I won’t have to buy any more gas, period. I can get used vegetable oil for free. Plenty of folks are doing just that, and restaurants seem to like donating the waste oil – they get to feel like a piece of the solution at no expense or trouble to themselves.

Using waste vegetable oil is sort of like dumpster diving. It’s the ultimate in recycling, reusing, reducing. Like vintage clothes and straw-bale houses and day-old breads donated by a bakery, using waste veg is making use of materials that would otherwise be entering the waste stream. And after the initial outlay for the conversion kit, burning waste veg costs nothing.

I interviewed a woman named Kim last month, a waste-veg user in North Carolina. She gets all her oil from a nearby Mexican restaurant. Her exhaust smells like tortilla chips! If our oil supply from the Persian Gulf countries completely evaporates next week, it won’t affect Kim’s use of her car. She’ll just head to her donating restaurant to get her weekly ten gallons of used vegetable oil. She’ll filter it herself, pump it into her fuel tank, and away she’ll go. Kim has a green and purple hand-lettered sign on the back of her VW Golf that reads, “This car runs on vegetable oil.” Wouldn’t that be fun? I want one. My neighbors would be puzzled. “What?” they’d say. “You know, donated restaurant grease,” I’d reply with a friendly smile. “Here, let me explain….”

It Feels Good
I realize that waste veg is probably not going to be the big replacement for disappearing petroleum fuels. After all, only 3% of cars in the United States have diesel engines that can burn vegetable oil. But still, for right now, it’s an exciting option.

Unlike ethanol, vegetable oil is not being promoted by politicos and billionaires and corporations with ulterior motives. Veg oil is a grassroots effort; it’s in the hands of the middle-class working stiffs like myself. A year ago, I didn’t know a single person using biodiesel or waste veg. I don’t think anyone in Charlotte was doing it. Now I know too many veg-users to count. Now, there are two biodiesel coops right here in my hometown! There’s a biodiesel coop in Pittsboro too, and in Statesville, and in Asheville…..the numbers are growing in the real world. Maybe there’s a limit to how far we can go with vegetable oil, I don’t know. But right now it feels like people taking power, and it feels good.