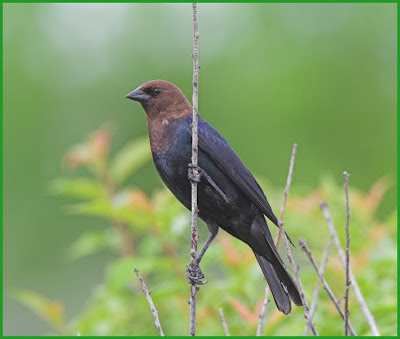 Brown-headed cowbirds of North America have long been known as "brood parasites" or "nes parasites". They routinely lay their eggs in the nests of other birds, then abandon the eggs. The nest owners, often warblers, are left to raise the noisy and hungry cowbird chicks, which are usually bigger than their own chicks. Warbler chicks sometimes starve, because the husky cowbird chicks take all the food.
Scientists and birders have long wondered why the unwitting babysitters don't toss out the cowbird eggs and young and devote their time and energies to raising their own offspring exclusively.

New observations of cowbirds and the exploited nest owners may have turned up the answer.

When cowbird eggs are removed from a warbler nest, more of the warbler eggs wind up being smashed or carried away than in nests where the cowbirds are allowed to stay.

To test their theory that the vandals were cowbirds, the scientists removed all the cowbird eggs but put new fronts on the warbler nest boxes with holes too small for the adult cowbirds to re-enter. The warbler nests remained intact.

So the nest-molesters were cowbirds.

A parallel situation exists between cuckoos and the magpies that parasitize cuckoo broods in Spain. Magpies also retaliate by trashing the cuckoos' nests if the magpie eggs are kicked out.

What's a parent warbler to do? The best strategy is to work like hell around the clock and raise those cowbird chicks as well as their own. The fact is, because of cowbird retaliation, warbler nests with the cowbird eggs removed produce only 40% as many warblers as the nests that retain the cowbirds.

It doesn't pay to cross those gangster birds.

Conservation issues related to brood parasitism
Is brood parasitism a threat to the species survival of smaller songbirds such as warblers? In the past it hasn't been, because most of the parasitized species have habitat preferences that generally take them beyond the reach of cowbirds, such as deep extensive woodlands. Cowbirds avoid deep continuous forests. They prefer agricultural or residential landscapes near scattered trees or woodland edges. Such edges are created when deforestation leads to fragmented forests and open brush or grassland.

Unfortunately, North American forests are becoming more and more fragmented due to the paper and timber industry, and due to development from the growth of our human population. So warblers and other small songbirds that are the most common targets of cowbird brood parasitism are losing their refuge from cowbirds, forced to nest in forest fragments that are easily penetrated by edge-seeking cowbirds.

What can you do? Contact the director of the division of natural resources in your county or state and ask what you can do to encourage the perservation of large tracts of continuous forest. Ask what opportunities there are for citizen input into land-use planning on public lands. 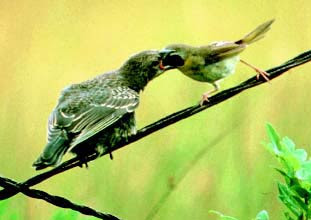