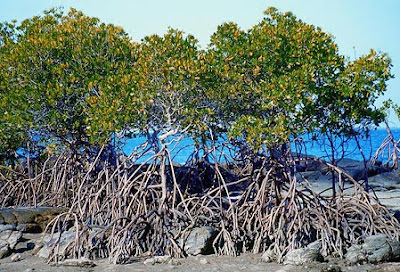 mangroves at low tide
Mangrove forests, found along tropical coasts throughout the world, may become tools in the fight against global warming. A study by Malaysian professor Jim Eong Ong reveals that mangroves may sequester more carbon than any other ecosystem on earth, soaking up some of the carbon dioxide that humans generate. 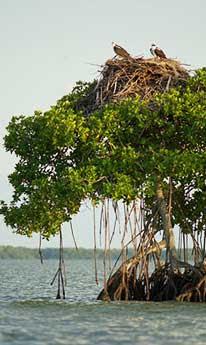 However, mangrove forests in South America and Southeast Asia are being destroyed to clear their shallow ocean-side habitats for the building of shrimp ponds to meet the increasing demand for seafood in rich countries such as the United States. Shrimp farmers only use each pond for a short period before clearing more mangrove forest to build new ponds - a strategy to avoid disease in shrimp populations. In other areas of the world, human population growth has led to destruction of these coastal forests to make way for oceanside development. But new evidence could provide more incentives for preserving mangroves forests, which are home to many coastal birds that nest nowhere else, and which protect the vulnerable young of many marine fish from larger predatory oceanic fish.

If carbon trading becomes mainstream, mangrove forests may benefit, as the forests could be "traded" as a commodity. If a developing country agreed to preserve a forest of mangroves, it could claim a carbon-sequestering unit and then sell it to an industrialized country struggling to reduce emissions. Thus,
mangrove forests would be preserved both for their ecological value and as a new weapon against global climate change. Destruction of mangroves is not only bad news for our climate, it can also have devastating effects on ecologically and commercially important fish populations. 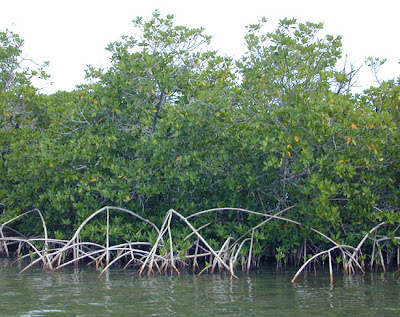