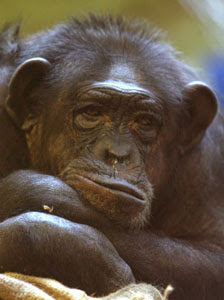 I was dismayed to learn not long ago that the biggest importer of primates worldwide is the United States. According to an American University document, we import more than 20,000 primates per year into the U.S. We import four times more primates than any other single country, and many of them are wild-caught.

Does it matter? It does. More than 130 of the world’s primate species are endangered. Although the leading threats to primate populations are destruction of tropical forests and poor protection of existing reserves, the primate trade or black-market is also a major contributor to the worldwide decline of wild primates. In tropical countries, wild primates are captured and sold for food, for pets, and increasingly, for use in our research labs.


But here's what really puzzled me. I also learned that the U.S. is third in the world in the number of primates exported. Why would the U.S. import wild primates, and then export the ones that are bred here in captivity?

Turns out the answer is pretty easy. Wild-caught primates cost only a third as much as ones in cages. Big savings for a research outfit on a tight budget.

Is all this research on primates and other mammals (dogs, rabbits, etc) really necessary? Many think not. Much of our lab research involves animal-testing of personal-care products such as lotions and cosmetics that are simply new combinations of products that have already been tested.

What about medical research? Paul McCartney is a big supporter of cancer research in honor of his late wife Linda, but he's also an adamant animal-rights activist. Paul donates money to cancer research with the stipulation that it can’t be used to fund animal research. He points out that the most positive gains against cancer have been in education and prevention.

PETA, People for the Ethical Treatment of Animals, has a useful list of how you can help protect animals from laboratory testing, including not only dogs and rabbits, but also wild-caught and captive-bred primates, among them chimpanzees - our closest relatives, whose natural habitats are disappearing.

For more information about the worldwide trade in wild animals, the World Wildlife Fund website is an excellent source.