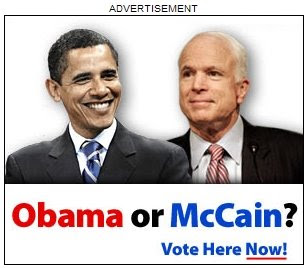 The student-run school newspaper of the high school where I work (in Charlotte) created a questionnaire for all the students and faculty, asking them to vote for a presidential candidate and to explain the most important reason for their choice. Here's what they said...

I was puzzled why 42% of the students chose McCain because of the economy. Does that make sense? No. But the students are young....a quarter are in 9th grade, after all.

It's also embarrassing to me that the environment was such a low priority. Folks need to WAKE UP! I just don't understand the human mind.

I voted for Obama in our mock election (and for real, in early voting). Here are the main reasons I listed for the school newspaper:
1) Obama has a better environmental plan than McCain.
2) Obama places a higher priority on the needs of families & middle class workers than on huge corporations.
3) He favors tax breaks for middle class families rather than for big corporations.
4) Obama rejects the "trickle down" theory of economics.

"Obama is serious about reducing our carbon footprint and reducing our overconsumption of the world's resources. Bush and McCain promote legislation and tax laws that benefit big business, saying that when corporations prosper, workers prosper too (the trickle down theory). But that doesn't work. Corporations' sole priority is to benefit their shareholders. Corporations by nature use the cheapest possible production methods - exploiting workers and exploiting natural resources, depleting nonrenewable resources, and polluting water, land and the atmosphere in the process. Bush has been manipulated for 8 years by corporate lobbyists whose only allegiance is to stockholders.

Bush and McCain seem unable to do anything that could hurt corporate profits - such as forcing corporations to clean up their greenhouse gas emissions. Production without pollution means higher production costs, and McCain won't take a stand against corporations that pollute."

That's the gist of it for me. As a biologist, a lot of my thoughts are about emissions and global climate change. Most scientists agree that the coming ravages of climate change will be the biggest challenge humans have ever faced. When the Republicans let corporations do whatever they want, they exploit and trash. Enough of giving corporations huge tax breaks and free reign.

If you want to read more specifics about Obama's specific voting record on the environment, see this summary of Obama's environmental platform on Grist magazine website. To see a comparison of Obama's and McCain's platforms on big environmental issues, click here.

You might want to read this interview with Barack Obama by Grist and Outside.

By the way, if you read this before November 4, please please please go out and vote. Go to http://www.voteforchange.com to find out the nearest polling place to your home.

Labels: obama on the environment, why I voted for Obama; obama's environmental