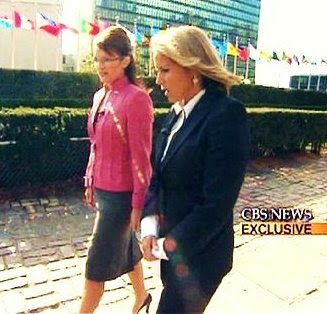 I admit it; I was hoping Sarah Palin would do something amusing during the VP debate Thursday night. We've had a week of merriment in my house, watching and re-watching her interview with Katie Couric, and Tina Fey's imitation of it for SNL. (Check it out on youtube.)

As it turns out, Palin didn't do anything truly comical during the debate. But she did blank out on many of the questions in a less dramatic fashion. She blanked out in that she didn't answer the questions. Repeatedly, when asked about complex topics such as subprime mortgages, she ignored the question and instead launched into more comfortable, rehearsed territory. Her favorite topics were energy, tax reform, and Alaska. Smiling gaily, she referred to Alaska's natural gas reserves as "clean and green." Hmm....last I heard, natural gas is still a fossil fuel, and as such, its combustion produces CO2. It doesn't have quite the variety of polluting by-products that coal and oil combustion do, true. But no fossil fuel is "green."

But let's consider her comment in the context of other remarks she has made. During the debate, Palin asserted that global warming is due, at least in part, to natural and "cyclical climate changes." Given that misconception, I can see why she's not too concerned about CO2 as a greenhouse gas. In a world-view where fossil fuels are not responsible for climate change, then natural gas can indeed be "clean and green."

How can Palin live in today's world and not understand the link between the burning of fossil fuels and global warming? Even Bush has finally accepted his error on that one. Could it be that Palin doesn't read? Take a look at this on youtube: Palin was either unable or unwilling to tell Katie Couric a single news source that she reads.

Now, that is scary. Nightmarish scary. Imagine the leader of the world's most powerful nation relying upon myths to explain the most challenging problem the world has ever faced.

While we're on the topic of myths, Palin apparently doesn't believe in evolution either. According to Philip Munger, a Wasila resident who teaches at the University of Alaska and was quoted in the LA Times, Palin told Munger that "dinosaurs and humans walked the Earth at the same time" and that "she had seen pictures of human footprints inside the tracks" of dinosaurs.

Although I started this post in a lighthearted frame of mind, reflection on Palin's lack of study and vacuous opinions is making me increasingly uneasy.

Joe Biden seemed equally distressed by Palin's vague uncertainty about any causal relationship between human activities and global warming. He replied with conviction that we do know the cause of global climate change, and that we must know the cause in order to do anything about it!

Friday's polls show that viewers feel Biden won the debate by a hefty margin. Thank God that Palin's beauty-pageant face, perky manner, and winks did not override the depth of Joe Biden's 30 years' experience in the Senate. Biden has a nice smile too, which he flashed a few times during the debate. But seriously, Joe Biden and Barack Obama offer real-world and fact-based solutions to complex problems, as Biden articulated so clearly and reassuringly during the debate.

I fear for the future of my family, the country, and the planet if Obama and Biden don't win this election. Well, regardless of who wins, I will fear the economic and environmental consequences of climate change that have already been set in motion. But if McCain and Palin somehow wind up at the wheel, then I may lose all hope.

Hi. It was great to see your blog on Sustainablog's Carnival of the Green. It's incredibly frightening, just in time for Halloween. We all have to keep hammering home the truth about Sarah Palin and not let people get all sleepy and goofy about her glasses or her wink or whatever.

Sarah
on a ledge
http://progressivekid.wordpress.com

Why didn't she bring up Jurassic Park, which shows humans and dinosaurs co-existing -- ON FILM. Indisputable evidence that man and dinosaurs lived concurrently.

I too am pretty scared of the thought of Palin in the VP's office. As CNN's Jim Cafferty said, (I'm paraphrasing) if McCain wins we're just one 72 yr-old's heartbeat away from President Sarah Palin. She is in no way qualified or capable of being President of the United States. As an Independent, any (remote)chance there was of me voting for John McCain went out the window when SP got on the ticket.