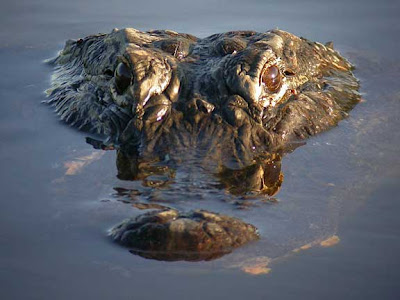 On a recent trip to the South Carolina coast with my friends, we stopped at Bargain Beachwear on Highway 17 to look for clothes. Among the thousands of objects for sale were many unfortunate animals – dead and alive.

Alligator specialties abounded, right up front were the dried alligator heads. Also popular were alligator feet or hands attached to a wooden pole, so you could hold the pole and pretend to “claw” your friends.

Beyond the alligators was a wire cage full of hermit crabs, all of their shells dyed neon green, pink, or yellow. The floor of the cage was a wire mesh with holes much too big for the crabs, and they were all stuck in the gaps. A woman who worked there told me she was the only employee not too squeamish to clean the cage.

I turned away from that unfortunate scene to wander over to the live frogs for sale in tiny containers; they looked like African Clawed Frogs. The containers held about one cup of water and were advertised as requiring almost no cleaning or maintenance. Wonder how long those frogs might live in one cup of untended water?

Scattered around the store were about 200 fake cats. They were designed so as to lie on the floor of your house so you could pretend that you have a real sleeping kitty. Upon closer inspection, I discovered that the cat fur was really rabbit fur. Who knows how many rabbits were killed for these totally superfluous items.

Everywhere I turned something new appeared. There were the dried puffer fish, blown up to their full capacity and solidified with an invisible goo. The fish had fake eyes glued over their original sockets and sold for about a dollar, designed to dangle from the ceiling as a decoration. 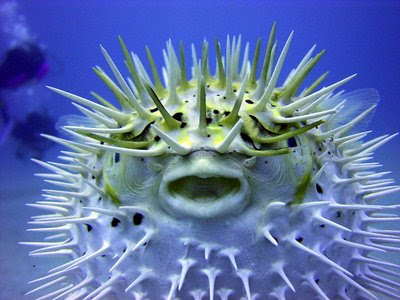 Live pufferfish, courtesy of newscottage.blogspot.com
All around were an abundance of shells, dried starfish, seahorses and other dead sea life offered for sale as souvenirs or gifts. Each was engraved with some posh Myrtle Beach design as a remembrance of the trip. 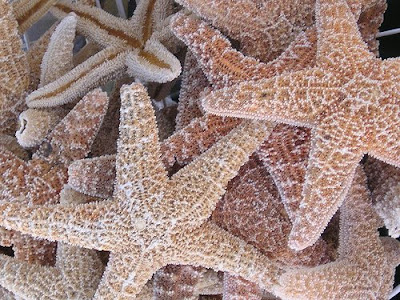 Dried starfish for sale
I can't guess how many of these animals are being harvested every day. Bargain Beachwear is only one of probably thousands of beach outlets along the east coast selling animal parts for next to nothing. A dollar for a dried puffer fish.

What started the demand for such things? Is it the sick satisfaction of holding what once was wild? Is it our admiration of beauty? Whatever the case, deep down we don't need them like this. Watch them alive in the wild, or on your HDTV. But there's no need to have it for yourself. Hang up a photograph of it instead.

When you buy souvenirs to take home from your trip, don't buy anything that has animal parts or plant parts in it. How do you know it isn't a species that's declining from overharvesting? You don't. So don't buy it. For more information on this topic, go to World Wildlife Fund's Buyer Beware page for travelers.

Alan, excellent post about a despicable situation. When I see so many animals treated is such a sickening manner, I feel like a "stranger in a strange land." Who are these people...what is this planet...where am I?