This virus IS a swine flu, and has roots in NC, the land of Smithfield 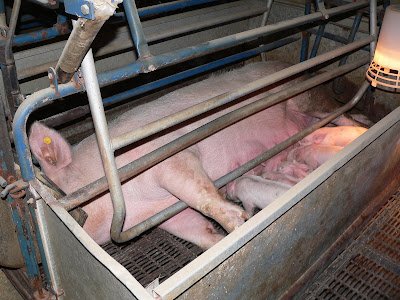 Sow with piglets in a "farrowing crate" on a NC factory farm. Photo by Sally Kneidel

Two days ago I wrote a post about the connection between Smithfield and swine-flu, and about a call I received from a major European newspaper. The reporter called me because I toured a Smithfield factory hog farm while researching our last two books, Veggie Revolution and Going Green. He wanted to know more about Smithfield's priorities and their methods, info that Smithfield would love to keep under the rug. Plenty of dirt has already been published on Smithfield's treatment of labor, animals, and the environment, in online documents such as Human Rights Watch's Blood, Sweat, and Fear. And in our own book, Going Green. But most people are still unaware of what the corporation is really about.

Swine flu started in Smithfield factory in Mexico
Mexican newspapers are reporting that the current swine-flu outbreak came from a Smithfield operation in the Mexican town of Perote, Veracruz. (See my previous post.) In my last post, I speculated that the swine-flu virus might have been created from a blending of bird and swine genes in that Smithfield facility in Perote. I was wrong about that.

Where did the virus (not the outbreak) originate? This morning, the Charlotte Observer reports these headlines "Swine flu has roots in N.C. outbreak." Is that surprising? No.

Smithfield chops and packs 32,000 hogs per day in the tiny town of Tar Heel
NC is home to the world's largest hog-processing plant (a Smithfield plant) in the tiny town of Tar Heel, NC, on the banks of the aptly named Cape Fear River. Because wages are low and accident rates are high, most of the laborers in that facility are Latin-American immigrants, many undocumented. They slaughter, chop, and package 32,000 hogs in that one plant every day. Undocumented immigrants are the least likely worker population to complain about injuries or abusive working conditions, which is exactly why Smithfield chose the low-income, non-unionized immigrant workforce of Tar Heel for its biggest operation. Mexico is an even better site. Lower wages still, fewer regulations to impede Smithfield's plunder of labor, environment, animals.

So...back to the origins of the H1N1 virus. No one is sure exactly where it originated, but "this virus was found in pigs here in the United States. They were getting sick in 1998. It became a swine virus," said Raul Rabadan, a Columbia University scientist studying the H1N1 gene sequence made public this week by the CDC. Continues the Charlotte Observer "it spread [in 1998] among pregnant sows in Newton Grove, about 45 minutes south of Raleigh (NC), causing them to abort their litters, and then to swine in Texas, Iowa and Minnesota." NC has 10 million hogs in factory farms, more hogs than the state has people. More hogs than any other state except Iowa. A single farm can have more than 50,000 hogs, all crammed together in filthy conditions. So it's not surprising that the virus may have made its first appearance 10 years ago in this state. By the way, 75% to 90% of NC's hogs are raised under contract to Smithfield and processed by Smithfield.

Viruses spread fast on factory farms, like a flame in a pile of paper
The findings about the H1N1's origins have raised new concerns about the health impacts of factory farms (not to mention the environmental impacts, or labor concerns). The U.S. Humane Society targeted NC a couple of weeks ago, before the flu outbreak. Because of the huge number of factory farms here, and animals packed so tightly in their own feces that they often can't even turn around, PETA has called on NC Governor Bev Perdue to close down all of NC's factory farms. Even the impartial PEW Charitable Trusts issued a report that said viruses can spread quickly among pigs in factory farms. 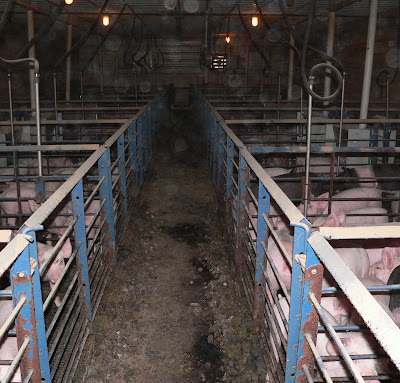 Typical filth in a darkened NC factory hog farm: note feces in the corridor and tiny window fan for ventilation. Photo by Sally Kneidel
As hog prices drop, we've been asked by the pork industry to avoid calling the virus the "swine flu," referring to it instead as the H1N1 virus. Said Jay Levine, an N.C. State University professor, the name "swine flu" is "a little bit of a misnomer." Even Obama, in his Weds night TV address, referred to it as H1N1.

But, as it turns out, "swine flu" is not a misnomer. Reports this morning's Charlotte Observer, "The current strain's eight genetic segments are all associated with swine flu." That's according to Raul Rabadan, the Columbia scientist studying the H1N1 gene sequence.

So what if it hurts pork prices?
Well. It is swine flu, so why not call it that?  If it causes pork prices to continue to fall, well maybe Smithfield will have to close down some of their facilities. And even if the virus did not first form in the Smithfield facility in Veracruz, Mexico, but instead in North Carolina, I'm guessing that Smithfield hogs were involved in its origins. 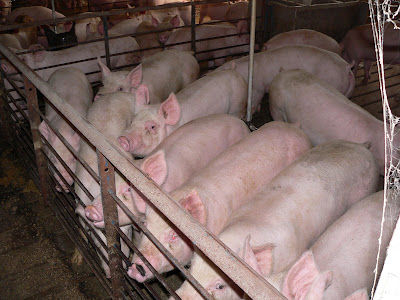 Sally, this is a really well researched report. I had no doubt that this flu was connected to the inhumane treatment of animals. It only makes sense that the food chain is reverenced all the way up and all the way down. Do hope this gets noticed and that Smithfield cleans up its act. I hope you will post this everywhere, so that the public will quit buying food that is not humanely raised. Thank you for your impeccable research and great writing!

Once again, educated by the inimitable Dr. Kneidel. Thanks for a great article.

The resurgence of many diseases that we thought had all but disappeared in recent years has been attributed to illegal aliens who pass the health examinations.