Animals making tools...what else are they capable of? 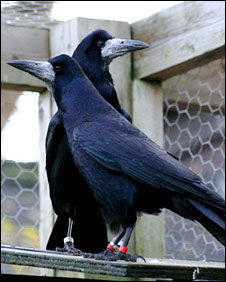 A pair of rooks. Photo by Christopher Bird, news.bbc.co.uk

Animals are at it again. Acting human. Or rather, exhibiting behaviors that we once thought were exclusively human. We once believed, I might say, that these behaviors defined humans as better, different, smarter than all other living things.

I'm talking about tool use. As it turns out, tool use has now been observed in dozens of nonhuman species, including otters, monkeys, chimps, and 39 species of birds!

The most recent study involves rooks, a crow-like European species common in folklore. They're in the same family as our American crows, ravens, jays, and magpies.

The rooks in this study, reported just today (May 28) in the Proceedings of the National Academy of Sciences, were given access to food that could only be obtained by pushing a small rock off of a ledge into a tube. They quickly mastered that task. Christopher Bird of the University of Cambridge and Nathan Emery of Queen Mary College, London, challenged the birds further by moving the small rock farther away. Before long, a female rook, Fry, figured out picking up the stone and carrying it to the ledge. Her mate, Cook, followed her actions, then a second pair did.

The birds mastered various other tasks involving tools such as sticks and wires. They even figured out how to bend a wire to fashion a hook necessary to retrieve items. Although wild New Caledonian crows have been observed fashioning hooks in the past, the authors assert that this is the "first unambiguous evidence of animal insight, because the rooks made a hook tool on their first trial we know that they had no previous experience of making hook tools from wire because the birds were all hand-raised." The New Caledonian crows were known to use tools in the wild.

I love research that shows how smart animals are, and how we're not the supreme beings we think we are. What else are animals capable of that we don't know about yet? They deserve more respect, more of the world's remaining resources, than they're getting from their human relatives.

All my previous posts about tool use (or making tools) in animals.

Randolph E. Schmidt, Associated Press. Rooks figure out how to use tools. May 28, 2009. Charlotte Observer

Sally! Well, of course animals are smart! I love Howard Gardner's (Harvard) research on what he calls the Seven Intelligences (Frames of Mind: The Theory of Multiple Intelligences). Artists have always known what 'others' call intelligent is not always so. His theory includes music for example, as a separate intelligence. Who decided that tool making was the defining difference, anyway??