Why is swine flu likely to return in winter? It's NOT because folks are cooped up together in winter. 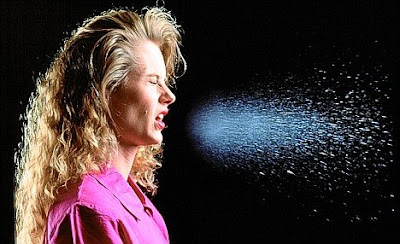 How do these sneeze droplets differ in winter? Read on!
Photo courtesy of www.dost-dongnai.gov/vn
Swine flu is so far turning out to be a milder disease than was feared a couple of weeks ago. Although it continues to spread from person to person around the globe, in most places it has been no more lethal than more familiar and common flu strains. That could very well change though when autumn rolls around.

"Our evidence from all previous pandemics is you get two phases. So you get a first wave which is often very mild and then you get a much more serious wave that comes along in the autumn and the winter," said Alan Johnson, Great Britain's Health Secretary. He was quoted May 4 in Britain's Telegraph.

Although there haven't been many cases of H1N1 swine flu in the Southern Hemisphere yet, we may see that change shortly. We may get a preview of what's in store for us come November.

Why are flu outbreaks always worse during the colder months? I heard an explanation on NPR's Morning Edition on Friday (5/8/09) that was completely new to me. I had always heard that flu spreads in winter because we're all cooped up together indoors. Turns out, that's not it at all!

Dr. Peter Palese of Mount Sinai School of Medicine and his colleagues have been studying the transmission of flu between guinea pigs, which can get infected with human flu viruses. Palese's results over the last couple of years indicate that spending more time together inside is not the causative factor.

Palese says flu viruses are more stable [and last longer, presumably] in colder, drier conditions. What's more, the droplets of fluid that people spray with sneezes and coughs are much smaller at lower temperatures and lower humidity, so the droplets carry much farther and stay suspended in the air longer. The smaller droplets can be inhaled more deeply into the respiratory passages and lungs, Palese says. The opposite is true at warmer temperatures and higher humidity, when the droplets become much bigger and sink to the floor, reports Palese. These influences are so pronounced that "at 75 to 80 degrees, we don't see any transmission."

Wow! Who knew! But there's even more new data to debunk the old "crowded indoors" theory.

In cold air, "the mucous is much more viscous," Palese explains. Sticky mucus clogs up the cilia, or tiny hairs, that normally move in waves to expel virus-laden particles from the breathing passages. So in cold weather, inhaled flu viruses tend to stay where they land, reproducing and infecting the unfortunate victim.

Well, it looks like this South American winter is going to be a testing ground for the H1N1 swine flu. We'll see whether it attacks with a real vengeance, spurring the next scary flu pandemic, or whether it fizzles out like some of its predecessors have done.

For constantly updated info, see the H1N1 page on the website of the Pan American Health Organization.

My previous posts on swine flu:

This virus IS a swine flu, and has roots in NC, the land of Smithfield

John Bingham and Auslan Cramb. May 4, 2009. Swine flu: the worst is yet to come in autumn, warns Alan Johnson. Telegraph.co.uk

See this post featured on May 10 on BasilandSpice.com, an Official Google News Source.

Assuming the Swine Flu reaches the pandemic proportions feared in the southern hemisphere, the CDC announced a potential fall swine flu immunization campaign that may involve an unprecedented 600 million doses of vaccine -- far greater than the roughly 115 million doses of seasonal flu vaccine distributed each year.

I guess we watch and wait.

And, yes, most viruses (unlike bacterial organisms) propagate and thrive more readily in dry and cool climates. They're definitely a unique and one-of-a-kind creature.

Herbal medicines have had a checkered history ever since, in and out of favor with the great and the common man. But throughout the last 5000 or so years, it has continued to develop until today, when in the light of growing concern about the efficacy and side effects of many synthetic drugs, herbal medicines are once again providing a safe and natural alternative treatment for many everyday complaints.